I spent the weekend with my nine-year-old goddaughter. In between the swimming, movie-watching, and going to the fair we also squeezed in one of our favourite activities—drawing. Of late, Charlotte has been canvassing for a character in my next Kendra book to be based on her. She pushed the case this weekend by producing a portrait of herself as an Een.

I’m not sure why she has a bite out of her side. In any case, before Charlotte even asked, I had planned a scene with a new (albeit minor) character named Charlotta Chirpsong. Alas, the scene ended up being extraneous, and I had to take it out. If I can find a place for her, maybe she’ll go back in—otherwise, it just might have to wait until Book V. But I very much like the idea of kids drawing themselves as Eens. I’ll have to try it at as an activity at one of my school visits.

Last week, I finished the painting of the Story Safari that I’ve been working on. I’m pretty happy with it, and plan to use it as the cover for my program binder this year. Check it out:

Of course, Charlotte decided to do a version of it as well. 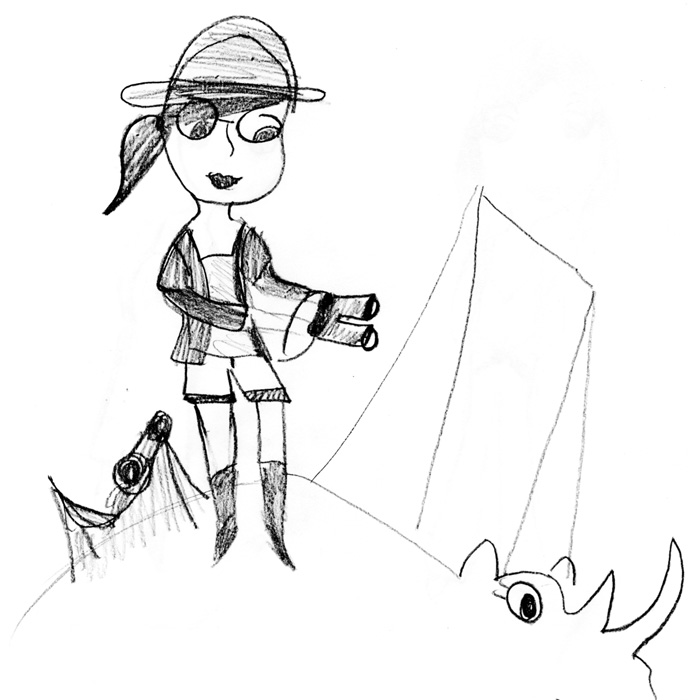 She kept calling the rhino a hippo, and I finally gave up correcting her. Come to think of it, a hippo would make a pretty cool safari ride.

We just posted a new episode of Authors Like Us. We’ve been on a bit of hiatus, mostly because James and I have both been travelling to opposite ends of the world this summer. We do have a few shows in the queue, and the first one features one of my close friends, Kari-Lynn Winters.

You’ll quickly discover how much fun Kari is . . . I’m not sure she’s able to finish a single sentence in this episode without laughing! Listen in, and you’ll learn how Kari first was inspired to be a writer and get an insight into her brand of humour.

Authors Like Us interviewed Kevin Sylvester last week. We haven’t posted the episode yet, but once we do you’ll be able to hear how keen I was to talk to Kevin about the fact that he illustrates his own books—just like me. In that interview he discussed how he works on the drawings and words simultaneously. Normally, the words are what spawn the illustrations, but on occasion the way he draws something causes him to go back and change the words.

It’s the same for me. I often change the words to fit a new picture, or perhaps a picture will give me a new idea for the text. There are also those times when I scrap an entire drawing and replace it with a new one. That’s always a little bit more frustrating. After all, it’s relatively little work to edit a paragraph, but immensely more work to redo an entire drawing.

Sometimes there’s no help for it though. In fact, I’ve spent part of today redoing a drawing of Uncle Griffinskitch. The illustration below is the very first one I drew for Kendra Kandlestar IV:

Originally,  I wanted to put this in chapter 1, when the old wizard is instructing Kendra in the ways of Een magic. I like this picture a lot, but I’ve ended up illustrating a picture of Kendra in pretty much the same pose that I want to use in Chapter 1. Humph! Too many sitting poses in one chapter!  So I decided to just scrap the above drawing all together until I realized I have another scene, later on in the book, where Uncle Griffinskitch is mediating. Only problem is that I can’t use the above illustration, because the other scene in which Uncle Griffinskitch is meditating is in Burdock’s dungeon. And, because of that, the ornery old wizard has to look a lot more scruffy. Plus, he has to be in chains. Oh, and he can’t have his staff, or ring, or even his beard bracelet because Burdock took them all away.

So I just redid the whole illustration from scratch. See? 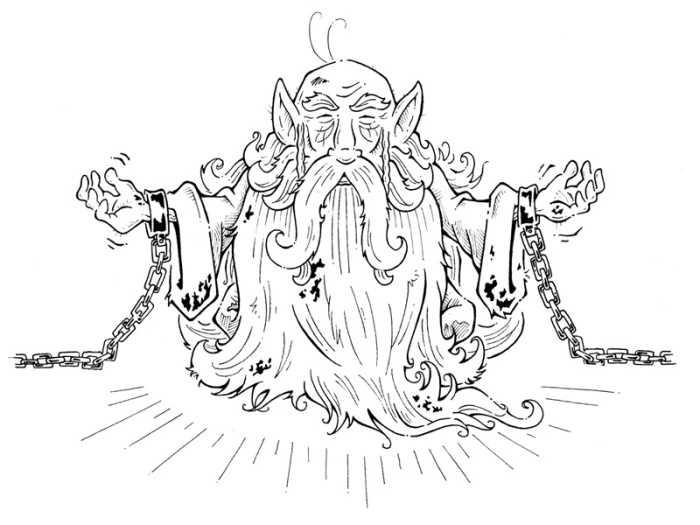 It’s a small illustration, so not a lot of work. It’s better than doing an entire complicated illustration from scratch (which I’ve done many a time in the past!).

By the way, I don’t think old Griffs will get his beard bracelet or ring back—so he’ll just have to look a little scruffy for the remainder of the book (maybe the whole series!). 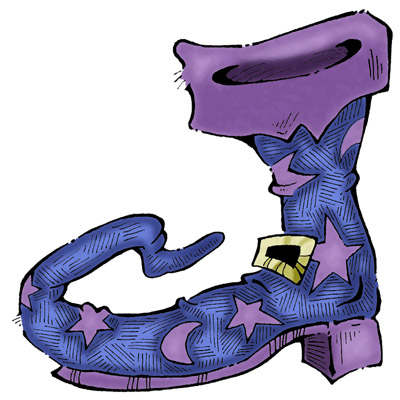 Fans of Kendra might remember one of Ratchet’s first inventions, the Time Boots. The boots were meant to take the wearer back in time. They sort of work. Unfortunately, Ratchet designed the boots so that their long curly toes pointed backwards, which meant that the user kept bumping into himself coming the other way.

I kind of feel like I’ve been bumping into myself lately, trying to sort out this plot for Kendra Kandlestar IV. I’ve been going around in circles, trying to write myself out of a corner. There have been some sleepless nights.

The challenge I’m running into is to keep everything on track and not contradict anything that’s happened before, while at the same time propelling the characters and plot forward. This being the fourth book in the series, I’ve taken on the ambitious task of trying to cover many different eras of time in the Een world and to set up for a grand finale that I hope to accomplish in Book 5.

Well, I think I’ve finally got it all mapped out. Literally. See, here’s a snapshot of the very complicated flowchart I assembled this week on my trusty iMac:

This chart probably looks pretty confusing. It is. Hopefully, it represents the intricate workings of my brilliant plot. Either that or the ramblings of a madman. I’ll let YOU be the judge of that once your read the book.

Of course, I have to finish it before that can happen. So off to work I go . . .

After travelling through some pretty hot and humid climates lately, I’ve arrived back home in Vancouver to experience some more sticky summer heat. It’s unusual for here . . . but I’ll take the sticky heat over my sticky coconut right now.

See, I’ve been doing a lot of writing lately. Correction. I’ve been trying to write. Here I am, elbows deep in the manuscript for Kendra Kandlestar IV and I find myself hitting the wall. It’s a tricky book, this one, and now I’m at the point where I feel like I’ve run right smack into an Unger. And you know what they’re like.

I know I’ll figure this all out eventually, but this is the part of writing process I really hate. I have all the pieces in front of me and now it’s just a matter of moving them all around, until they lock together perfectly.

Here’s a snapshot of what I’ve been going through: endless scribbles and diagrams to try and figure my way out of my plot conundrum.

I know. It looks confusing. That’s because IT IS.

I said as much to my friend Paige today. She’s actually pre-reading what I’ve written so far and when I mentioned my frustrations, she actually had the gall to quote a scene from my own manuscript, when this blind old sorceress  says to Kendra, “You are too attached to the outcome.” Then she added that I should just let the characters wander for a bit and see where they end up.

Well, in the last month I’ve stood at the top of Whistler Mountain, swam in the lakes of the Okanagan Valley, hiked up the Great Wall of China, and hustled my way through the markets of Korea. All wonderful—but it’s pretty hard to draw and write when one is traipsing across the world.

Now that I’m back home, entrenched in my studio, I can get back into my routine, which pretty much looks like this:

Yes, it’s fair to say my cat distracts me—but in my defense, he does sleep right next to my computer. See, he long ago claimed part of my drawing station as his little kingdom. He rules it well.

In the meantime, here are some sketches and some final inked versions of drawings for work on the next Kendra book. These are all from the chapter dealing with that wondrous Een festival called Jamboreen. 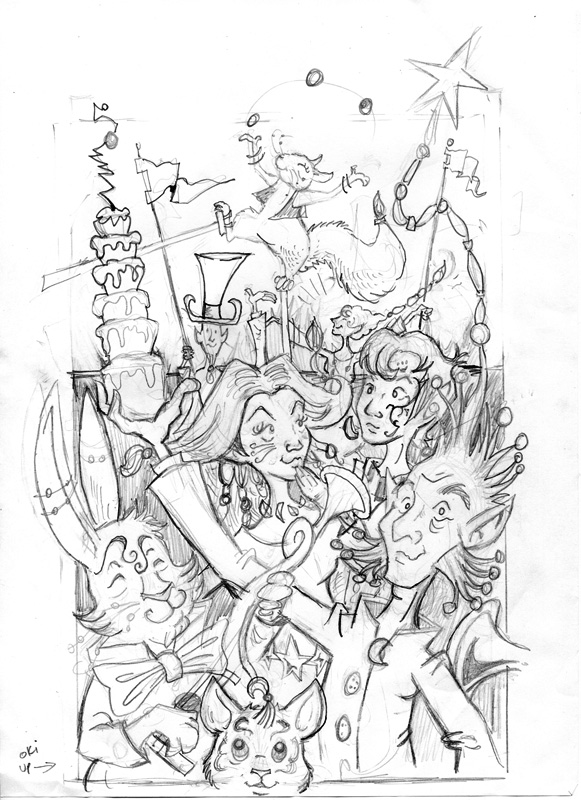 I decided to celebrate my last full day in Korea by eating one of the strangest “street treats” I’ve ever encountered. It’s called “Poo Dough” and is essentially a pancake on a stick, but—here’s the kicker—in the shape of a giant blob of poo. Ah, but that’s not all! Each poo dough is stuffed with Korean black bean paste to help emphasize . . . well, er . . . you get the point.

Trust me, this is not a case of cultural misinterpretation. The poo dough packaging makes it all explicitly clear . . .

My final word on the subject is that poo dough is delicious. In fact, I will confess I ate three of them.

Between the Cracks of Here and There
Blog at WordPress.com.