One of the major new characters in Kendra Kandlestar and the Search for Arazeen is Shuuunga, the Unger witch. She has been an exciting character to write and this week I have been intensively editing some of the scenes with her . . . which also prompted me to do some sketches:

Eventually, these will probably find their way into the final book as inked illustrations.

One of the sites I was really intrigued to see on my recent trip to Europe was a memorial on the Danube River promenade in Budapest that commemorates Jewish victims of one bloody night during the second world war. The monument offers a compelling and chilling scene: a line of shoes, cast in metal, set along the river embankment, representing those who were killed by members of the Arrow Cross (a Hungarian fascist organization) on January 8, 1945. The victims—men, women, and children—were taken down to the river, commanded to remove their shoes, and then were shot along the edge of the bank, so that their bodies would fall into the water beyond.

My own grandfather was from Hungary, but had left the country before the tumult of the 1930s and 40s. Still, looking at this monument, I was reminded of some of the stories he used to tell me as a child about his growing up during World War I.  He too once had soldiers arrive at his village of Farkasgyepu. They were rounding up anyone and everyone to fight in the war, and that included the young and the old. My grandfather was just a young teen at the time, but they would have taken him if he had not faked deafness. They took away a lot of boys that day, but, according to my grandfather, none came back.

Here are a few photos that we took from the Danube River. Many visitors place flowers alongside the shoes, or put pebbles or candles inside some of them.

Marcie and I recently finished off our trip to Europe by doing a few days in London, where I did some research for a book that has been floating around my coconut the last few years. It’s the story I’ll work on once Kendra Kandlestar is finished.

Earlier, I blogged about my trip to King’s Cross Station, but perhaps what was more helpful was our tour of the Tower of London.

It was not my first trip to the Tower, but this time I had a bit more of a mission, so I think I was paying more attention. In particular, I was really keeping an eye out for doorways, stairwells, and corridors, which will certainly play a central part in the story I’m thinking of.

I took a lot of photos of doors on my trip, but the one below is one of my favourites. Even though there were simply throngs of tourists at the Tower on the day of our visit, I was able to capture this one looking through a stone archway without any pesky feet intruding the frame!

The door below is far more menacing . . . one of the many leading into the more ominous sections of the castle complex.

Of course, if you were deemed a traitor to the crown, the first door you went through was Traitor’s Gate.

Below is just one of the many corridors we trudged through while exploring the chambers in the castle complex.

There is a legend that the monarchy will fall if the ravens ever vacate the Tower premises—so they keep a lot of them on hand. This one is called Merlin (though I think it’s a girl). It was simply HUGE, and quite a character.

There are lots of depictions of lions at the Tower, but I think the creature featured on the door below is a tiger. Or a bear. Or maybe it IS supposed to be a lion. 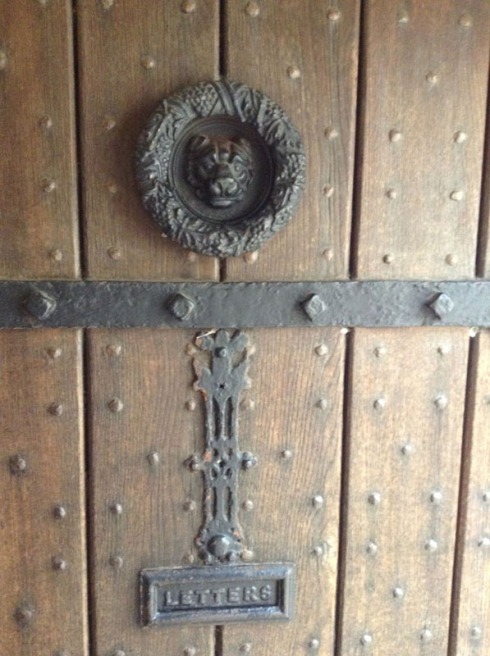 The creatures on this delightful red door must be lions.

The Tower featured many wire-mesh sculptures of animals, part of an exhibit about the creatures that once lived on site as part of the royal menagerie. Monkeys, lions, and even a polar bear all used to the tower home. They were eventually moved to the zoo at Regent Park. 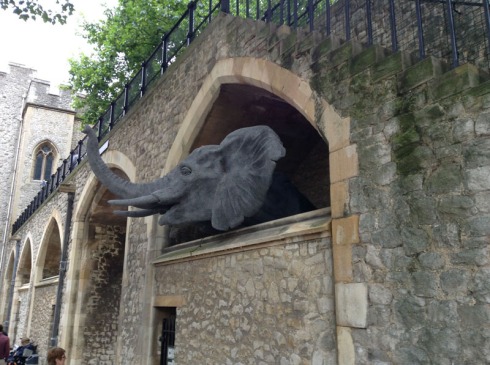 Another wooden door . . . this one, to me, seems to ooze with stories.

The door below seemed quite inviting (except for the fact that it was roped off).

Last, but not least, I thought I would show a photo of one of the many crenulated walls at the Tower (just to prove that sometimes I did take a step back to look at the overall castle!).

It can be hard work to chronicle Kendra Kandlestar’s adventures and the comings and goings in the Land of Een, so now and again a vacation to another world can do my mind a world of good. That’s why during our summer trip to London, Marcie and I made sure to visit King’s Cross Station where Harry Potter famously caught the Hogwart’s Express.

You can push your trolley through the brick wall. The cue to do so was short and we enjoyed watching people from around the world taking their turn before it came to be ours.

Here’s the photos we took of each other:

We also had the “station masters” take a photo of us as a pair and decided to part with the eight quid for the photo afterwards.

Of course, you can pick up the official photos in the shop just round the corner. Here, they have all sorts of wonderful displays set up and, of course, lots of Harry Potter themed merchandise threatening to lighten your pockets. 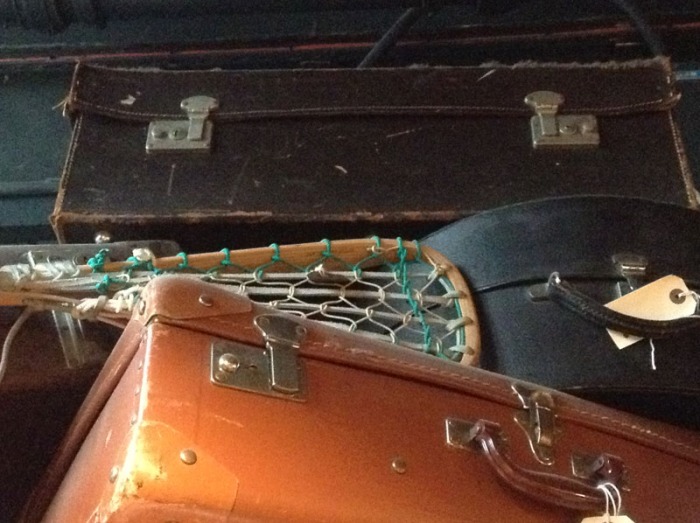 Wares on offer included not only all the books, but chocolate frogs, Bertie Botts every flavour jelly beans, wands, scarves, sweaters—even “wanted” posters. You name it, they have it! 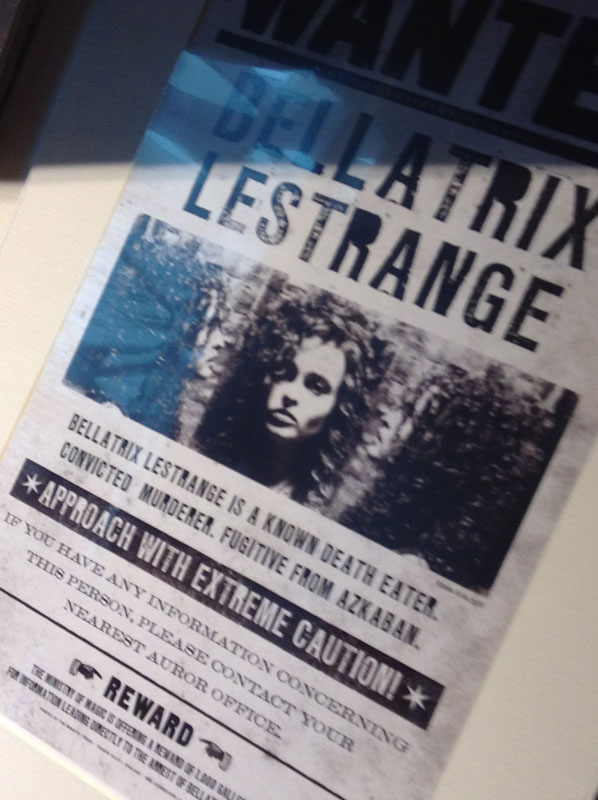 I already have my own Elder Wand and Hogwarts baggage tag (given to me, respectively, by fellow authors Kallie George and Kari Lynn Winters from their trip to the Harry Potter park in Florida), so my temptations were tempered. Other than the photo of Marcie and I, my only purchase was a Ravenclaw scarf. Why not? Practical AND geeky.

King’s Cross Station itself is quite something. It’s one of the busier stations in the London Underground and I was eager to explore it in order to do some research for another book I’m planning to write after Kendra Kandlestar is done. But more on that another time . . .

So far on our trip through Europe, Marcie and I have found ourselves continually heading underground to explore catacombs, crypts, and cellars. Earlier in our trip we saw thousands of bones in the Paris catacombs and in the crypt beneath Saint Stephens in Vienna.

So, I suppose it’s no surprise that the first thing we stumbled upon in our walk through the castle district of Budapest was an underground labyrinth. Of course, down we went!

It turns out there is a natural cave system beneath the Buda castle hill district that runs for some ten kilometers. The labyrinth that was open to the public was extremely dark and we were more or less the only ones down there (it was an unguided tour). There were no bones, but many interesting remnants of ages gone past. Eventually, we just became so claustrophobic that we scurried out the nearest exit we could find. That, of course, was before we had our fun . . . 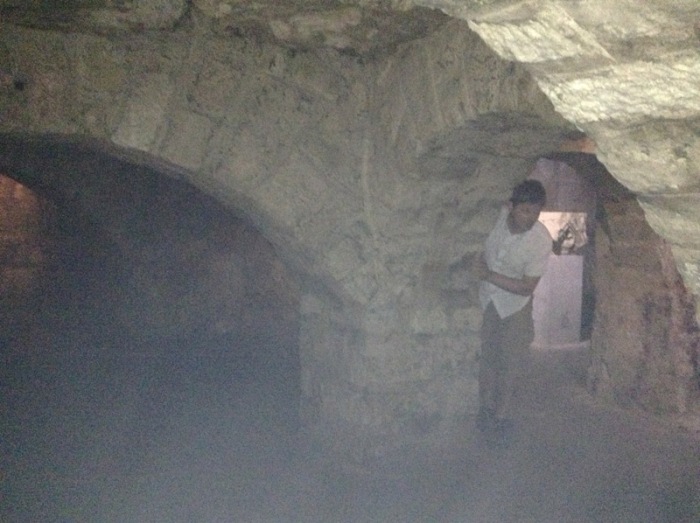 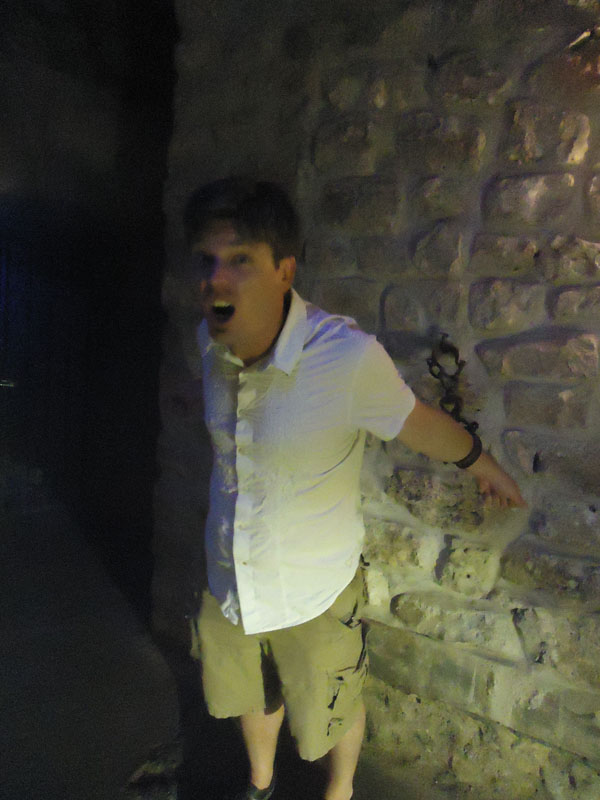 The next day we went on a wonderful tour of an underground hospital. It was adjacent to the labyrinth and was built during World War II to treat victims of the siege of Budapest. It was again used during the 1956 revolution and then by the Soviets during the cold war, who modified it to include facilities to deal with a possible nuclear fall-out.

We didn’t get to take any photos of the actual facility . . . but we bought some incredibly cool items in the souvenir shop, which are all authentic and used by the staff of the original hospital: a gas mask, a leather map case, and a glass hypodermic needle (this especially inspired Marcie, as she is a diabetic). We couldn’t believe how inexpensive they were (our breakfast that morning had cost more). In any case, we snapped them up as items of inspiration for both our own projects, and for our creative writing and theater students.

Afterwards, we went to the Spy Museum, which was also underground (though it didn’t have to be). There we saw all kinds of cool James Bond-style gadgets. My favourite was an old book that harbored a hidden transmitter/receiver device.

We thought that would be the end of the underground for us, but we were soon to discover that just about every restaurant on the Buda Castle hill has a cellar that winds into the caves. We ended up having a glass of wine in the deep, deep, deep wine cellar of the Hilton hotel. This was very cozy and romantic, and one of our favourite moments of the trip, since it was such an unexpected find. 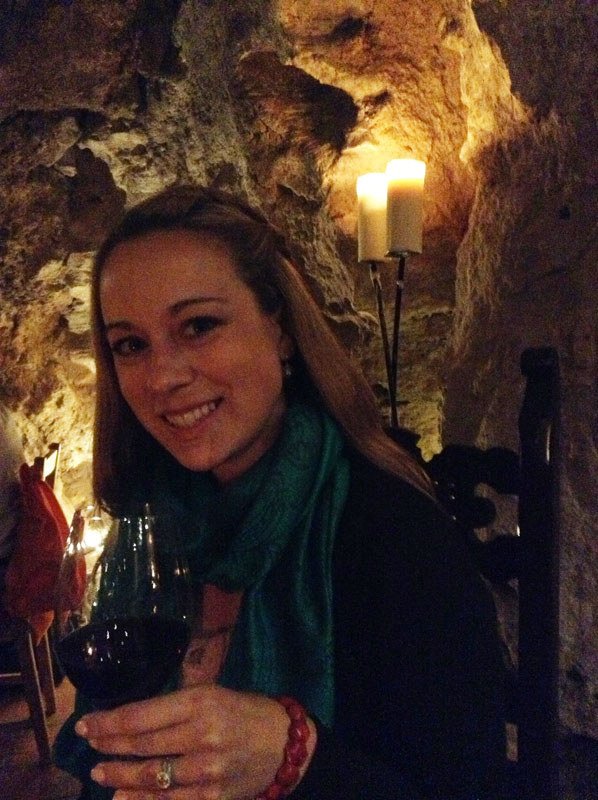 I’m just about to leave the wonderful city of Vienna. We had a short stay, but made the most of it by exploring the wonderful St. Stephen’s cathedral.

We went mostly up and mostly down. First, we climbed the 343 steps up the south tower. This is what it looks like from the outside:

The climb up (and down) involved navigating a very narrow corkscrew stone staircase that was not exactly good for my claustrophobic nerves . . . 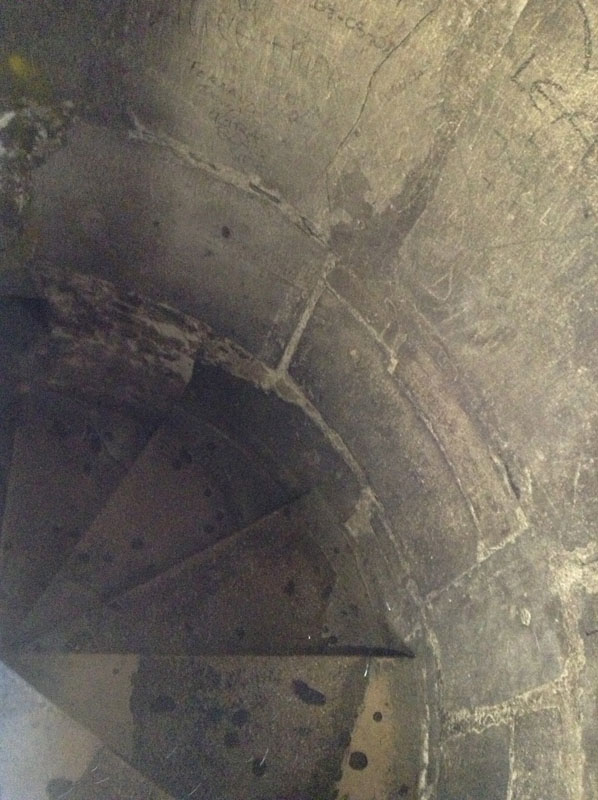 However, there were a few delightful distractions along the way, such as gargoyle faces and mysterious doors . . . 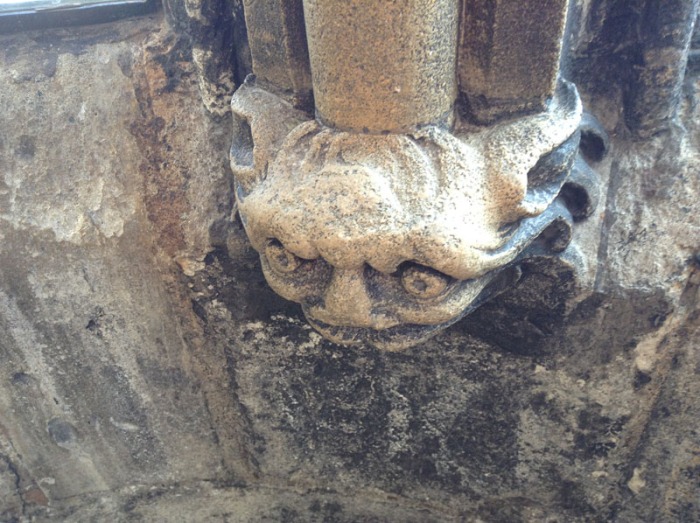 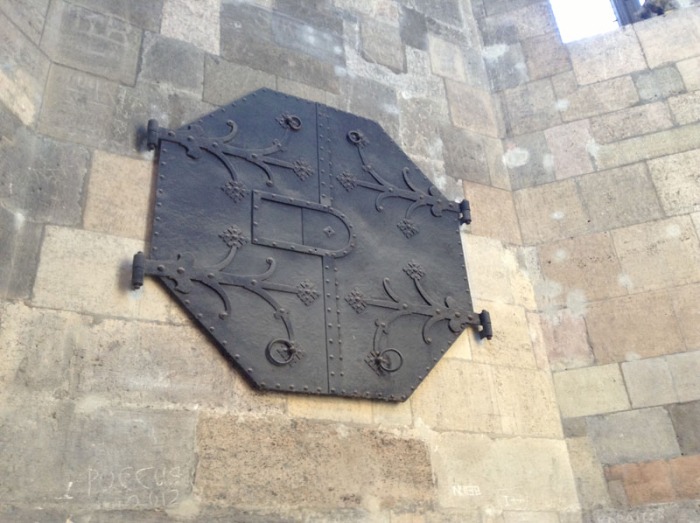 This was the view from the top: 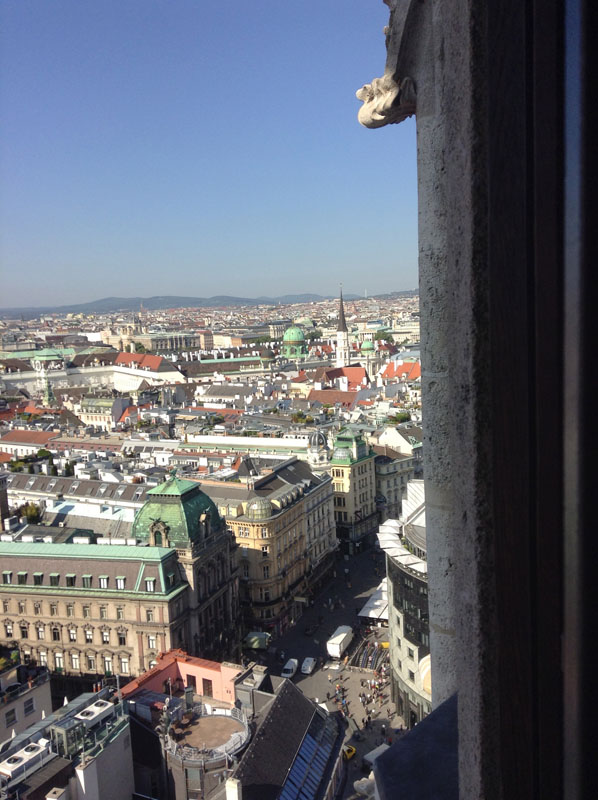 We then went beneath the cathedral on a guided tour of the catacombs.

The crypt itself was quite modern, as it holds important remains of leaders in Austrian history, such as Frederick III. These important figures were interred in proper coffins and tombs. Nearby, there were many urns that didn’t really capture our interest until it was explained that they contained the internal organs of the deceased.

We then moved on to the more gloomy portions of the crypt, where the bones of plague victims and residents of the old, discontinued cemetery are now kept. After having been in the Paris catacombs, where the bones were quite neatly stacked, it was rather chilling to just see piles of haphazard remains. In other cases, some remnants of clothing and coffin remained around.

I couldn’t take any photos, but a quick Internet search afterwards allowed me to find a few afterwards from other photographers (these two below are by Eddie Codel). 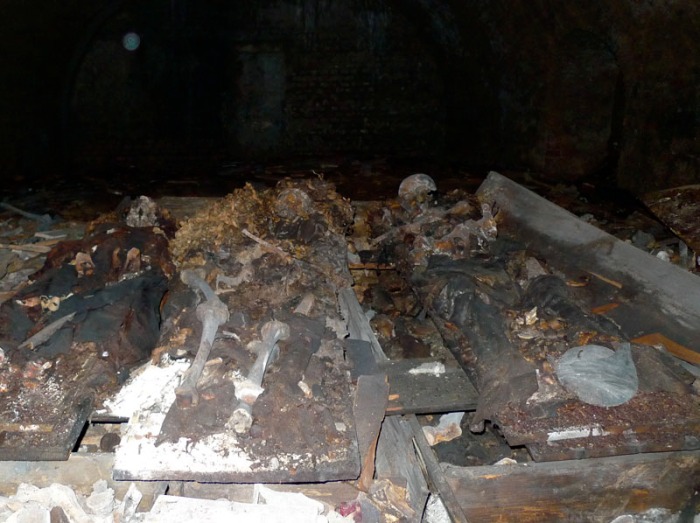 Oh, and here is one of the many doors out of the catacombs . . . it rather looks like a prison door, if you ask me.

We’re now off to Budapest . . . and looking forward to what adventures we can find there!