Here are some of the latest photos from the Dream Workshop I teach as part of the Creative Writing for Children (CWC) program.

My magic potions class is a great way to have the students add some conflict (or solutions!) into their stories and to help them experience the five senses. In this workshop, the students can visualize their potion, sniff it, hear it (because they always seem to fizz, crackle, and percolate), and even feel it as they stir it. The only thing I ask them to imagine is the taste (we don’t need anymore students turning into newts)!

Here are some photos of the potions during the brewing phase: 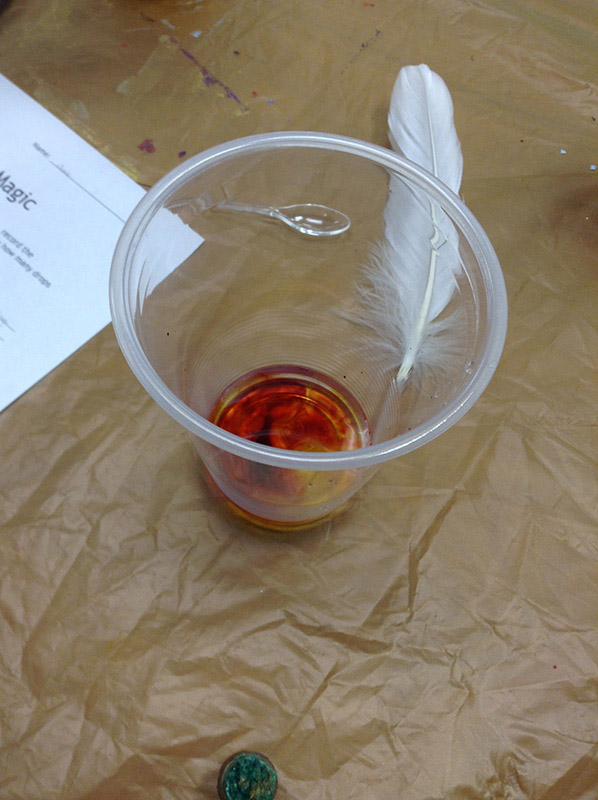 After the brewing phase, we took a sample from each “cauldron” and distilled them into miniature bottles that the students then labeled. Here’s how they looked at the end: 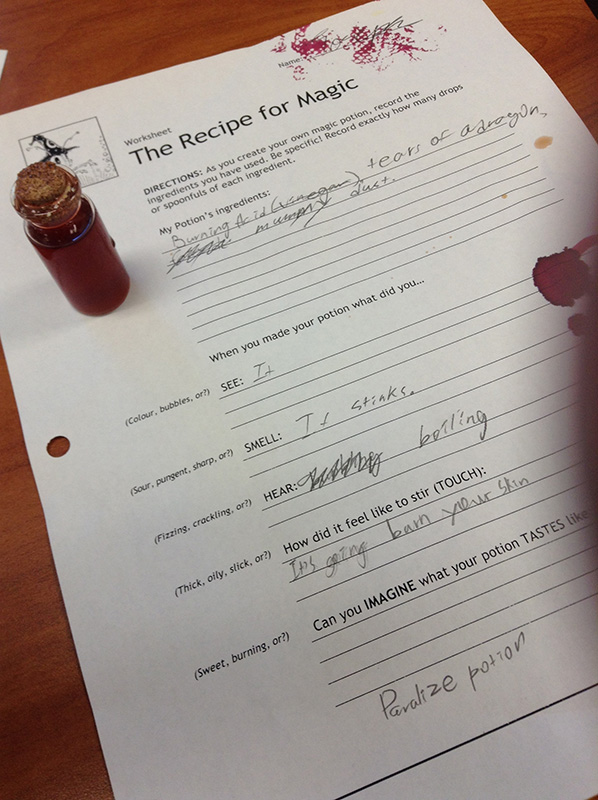 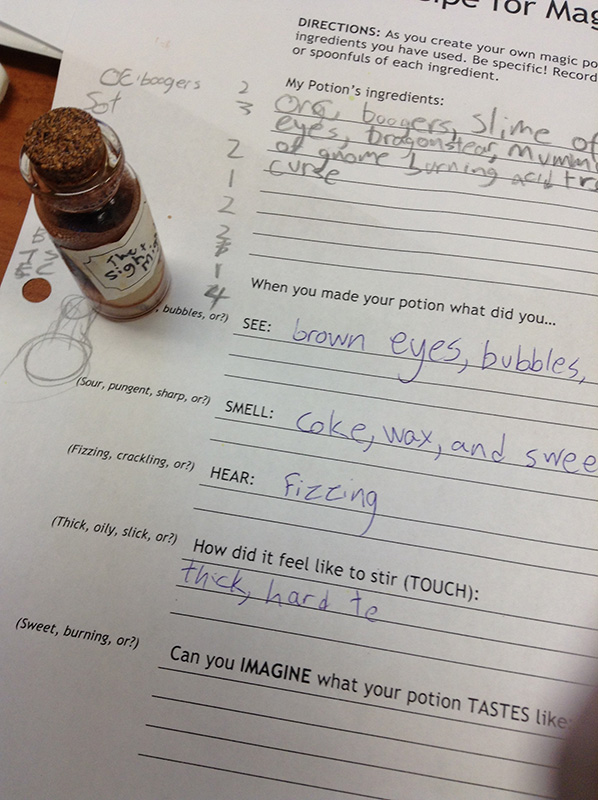 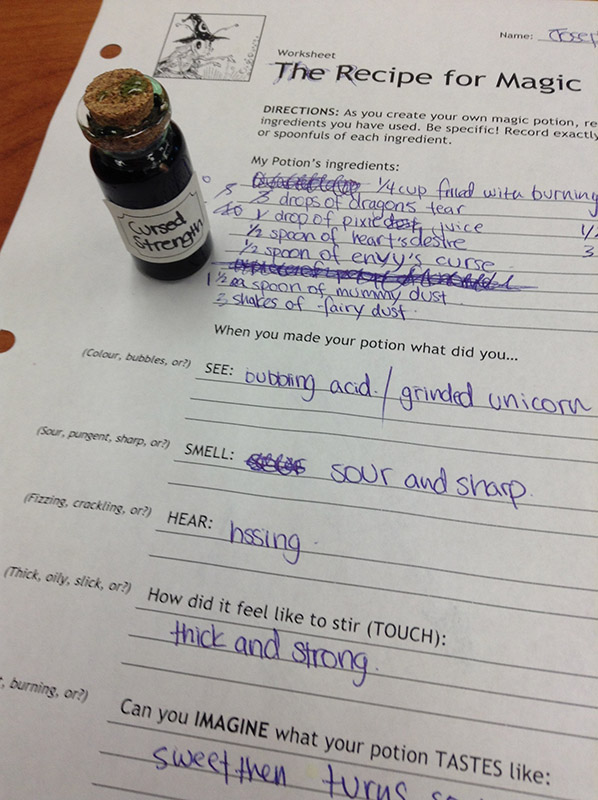 This year my creative writing program for kids took on an ambitious task: to help our students write, illustrate, and design their own picture books. This has been a real monumental challenge, given that the kids in this particular class our aged 8-12. They’ve had to stick with one story for an entire 15-week program!

I’ve been handling the illustrative side of the class, while my teaching partner Kallie George has brought all of her expertise in writing and editing picture books to help the students develop their words.

I’ve been away from the class for the last few weeks visiting schools in Korea and Thailand, so I finally returned home to take a look at their projects. When I left, they had just finished developing picture book dummies and had started on character design. Now the students are in full illustration mode.

Here are some photos of their books in progress . . . 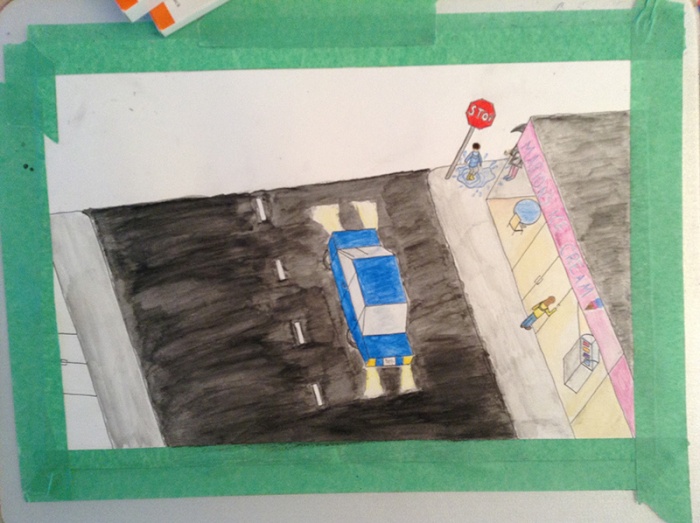 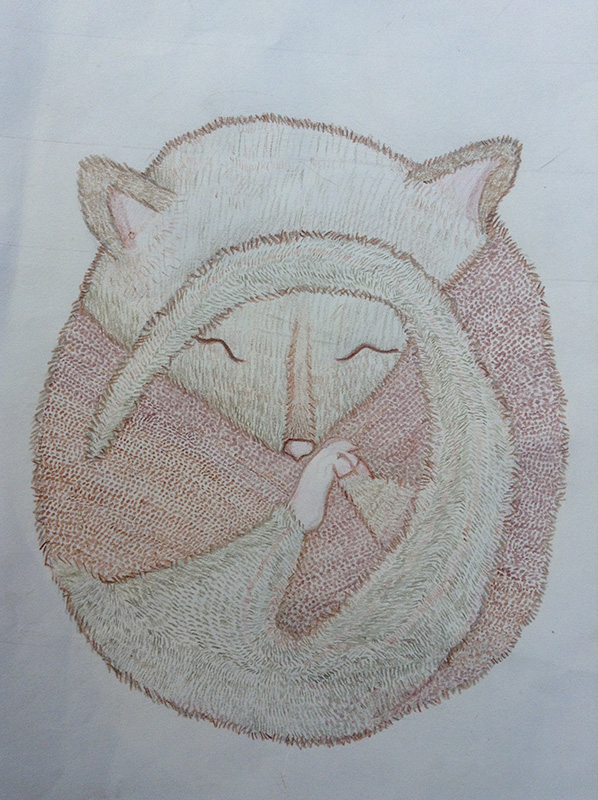 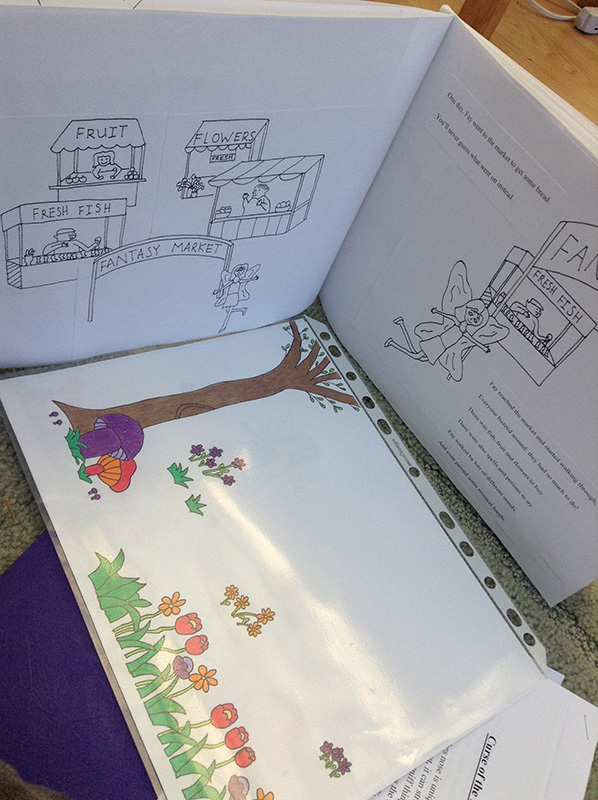 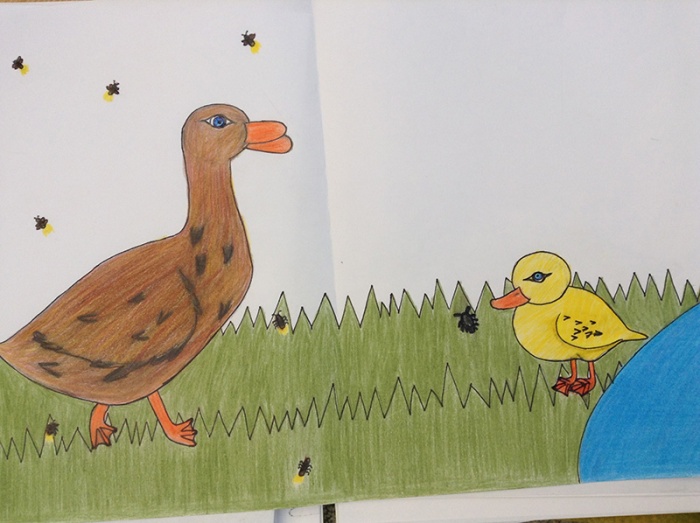 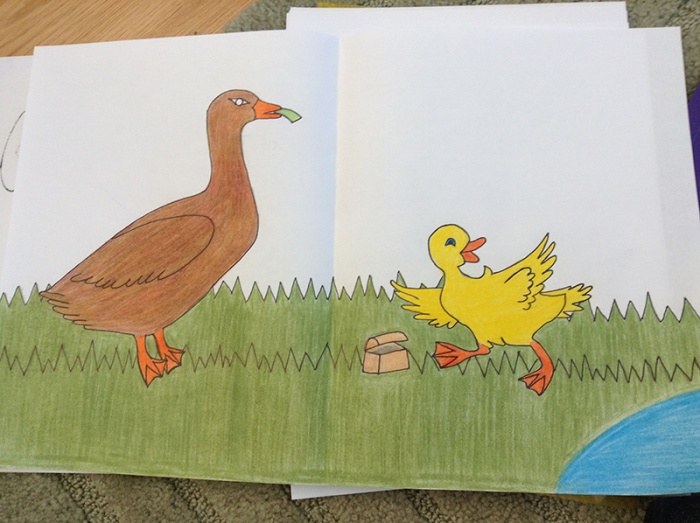 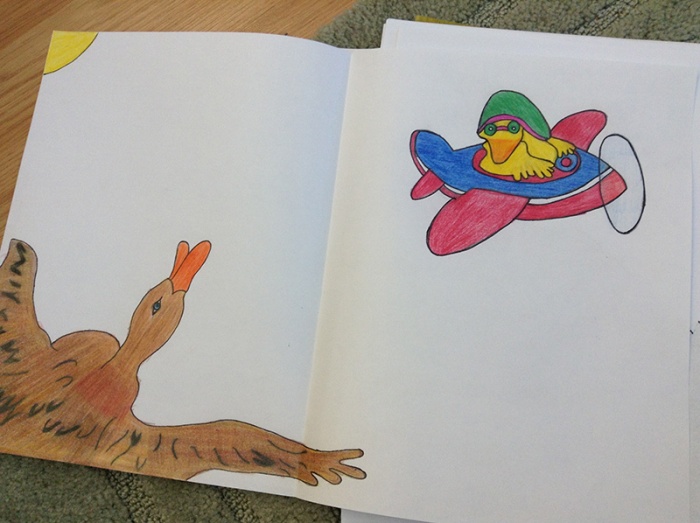 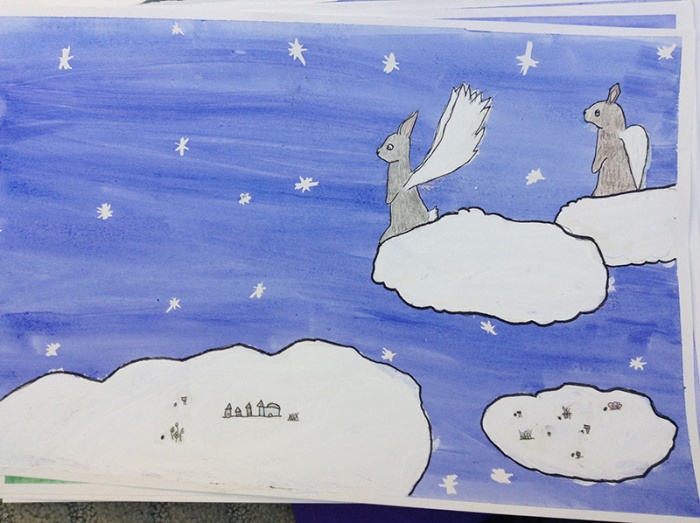 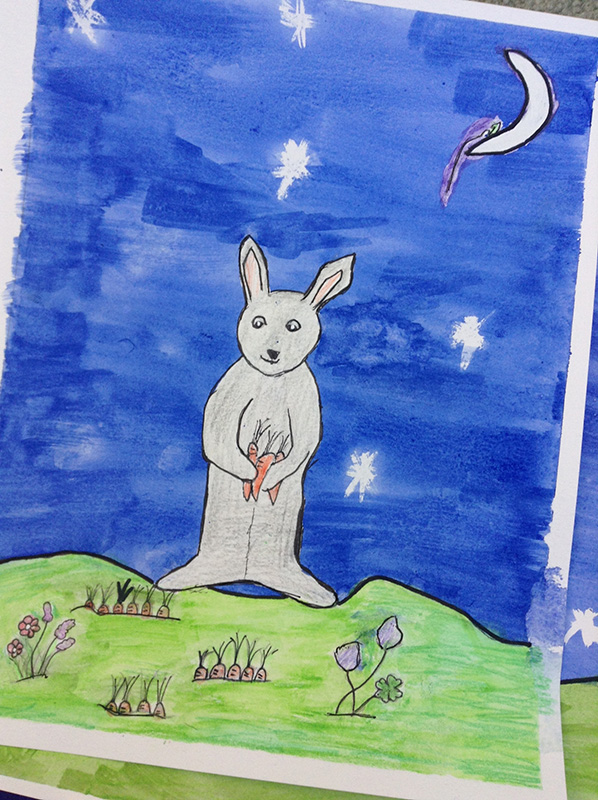 As part of the creative writing class (called Dream Workshop) I teach for CWC, I deliver a lot of hands-on activities. That’s because, for me, writing isn’t just about the act at sitting at a computer, pounding my fingers against a keyboard. It’s also about sketching, mapping, diagramming, and building stuff.

I find building stuff really helps keep my creativity alive. So much the better when what I’m building actually connects to a story I’m trying to write. While building a model or a prop, my imagination becomes inflamed and those dingy corners of my mind begin to percolate with ideas.

One of my favorite activities to work on with my classes is door-building. I’m obsessed with doors and take a lot of photos of them as I travel around. But it’s also fun to build them in connection to a story. For the students, it helps them visualize their stories, which means they are better prepared to add description and detail into their scenes.

Here are some photos of my most recent class. As always, the students’ creativity surprises me! I can’t wait to see these doorways come alive in their stories. 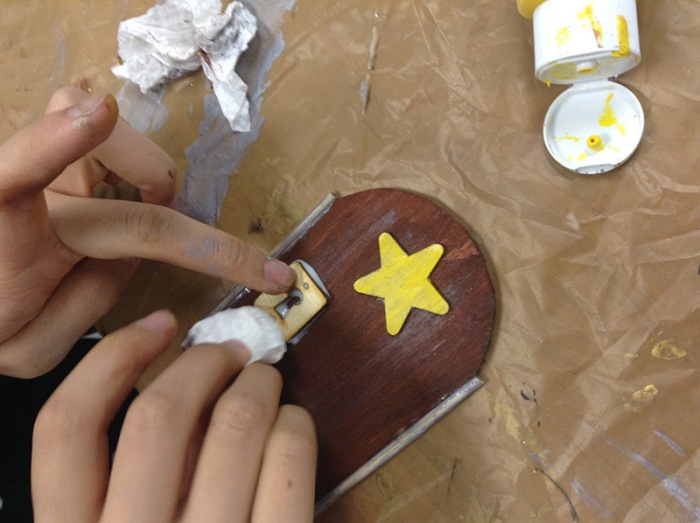 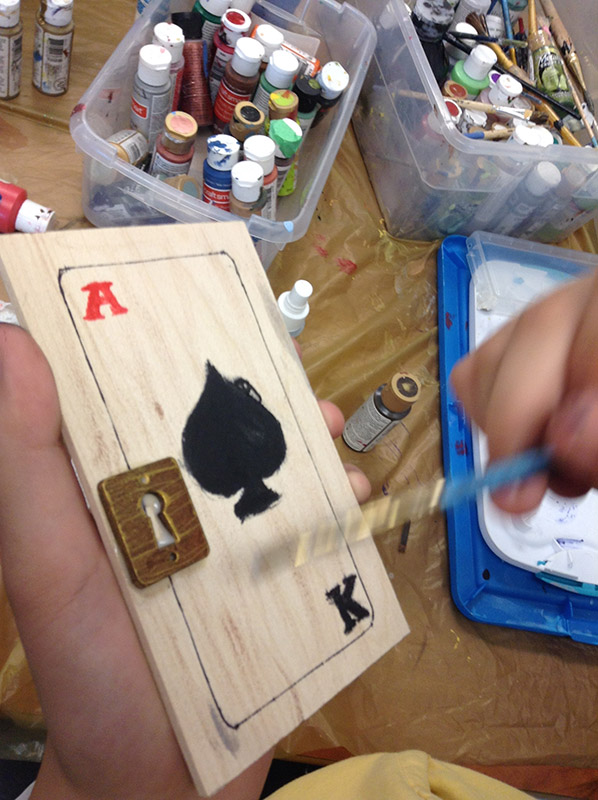 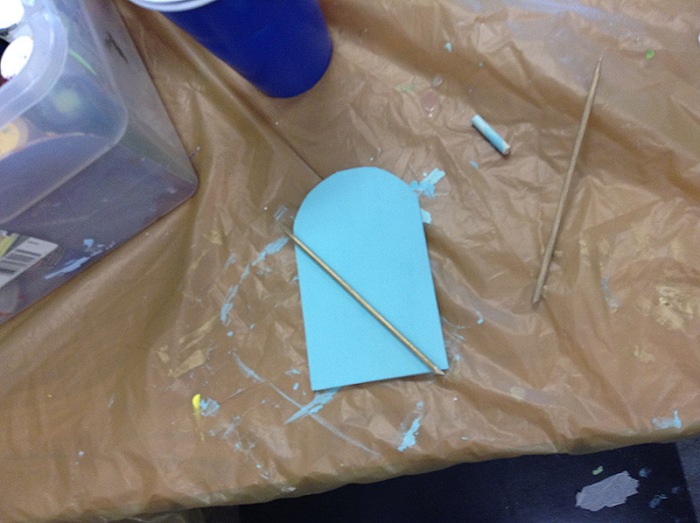 For two of the groups I was working with as writer-in-residence at ELC School in Thailand, we worked on miniature worlds. We began by designing a cast of characters, then had some of those characters miniaturized by shrink rays. After mapping out an epic journey across a single room in the house, I surprised my young authors by springing a climactic challenge upon their characters: a deadly creature.

Well, not SO deadly if you are normal sized, but for our miniature characters, beetles and centipedes and frogs could prove quite hazardous. This activity began with each student pulling a critter out of Bag #1. Then, from Bag #2, they picked out two “tools”—items such as toothpicks, buttons, clothespins, and the like. Using a brainstorming sheet, the students had to use their problem-solving skills to figure out how their characters could use the tools to escape the critters.

Here are some photos of their work in progress: 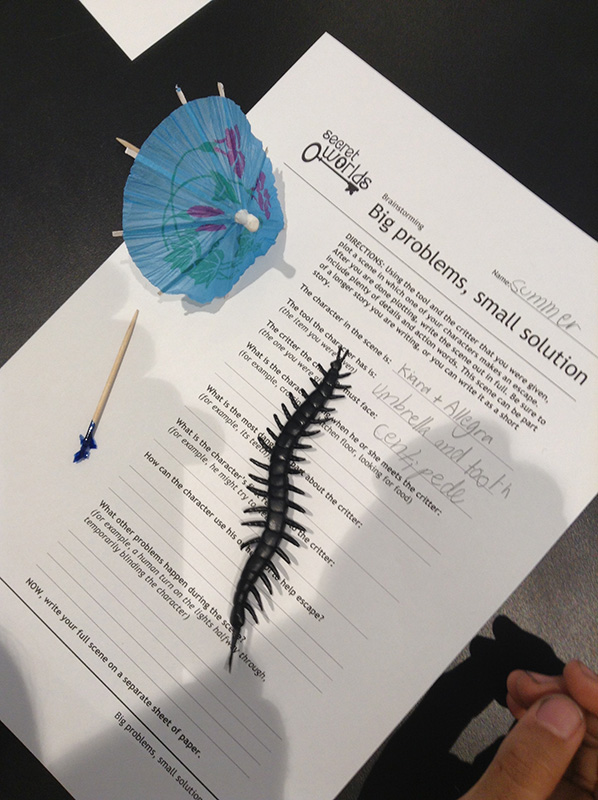 Now that they have been faced with the climatic problem and brainstormed the solution, the endings of their stories should be relatively easily to write! My time as writer-in-residence is finished at the school, but I’ve been promised that some of the stories will be sent my way so that I can see how they turned out!