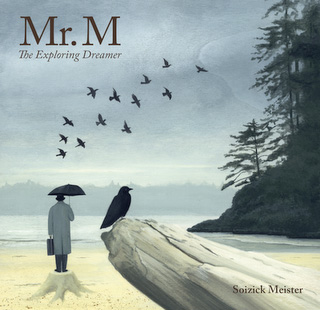 My students know that I LOVE words. In fact, I even collect them. Every time I come across a new word that I love, I jot it down in the back of my notebook. Why? Well, you never know what new words might be needed in the Land of Een.

My friend and colleague, Kallie George, has just written a great new book that really celebrates words: Mr. M: The Exploring Dreamer. This is not your usual type of art book.Taking inspiration from the enigmatic, eldritch artwork, Kallie has woven a narrative replete with deliciously wondrous words. If you’re a logophile like me, then I highly suggest you check out this book!

The official launch is TONIGHT:

Where: White Dwarf Books, 3715 W. Tenth Ave, Vancouver BC
When: March 31, 7 pm
Meet the author and illustrator and discover the magical muse behind this mysterious book! 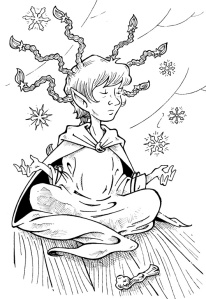 Most of my author friends know about editing and revising. They work really hard on their words, sculpting each and every sentence to try and reach perfection.

For me, I get a double whammy; I end up revising my words AND my pictures. More often than not, one distracts me from the other.

I spent the weekend fiddling with this drawing of Kendra, as she appears at the beginning of the book.

As you can see, I originally drew it to show her eyes closed, capturing her in a moment of meditation. She’s actually inside of Ratchet’s airship in this scene, being taught by Uncle Griffinskitch to use Een magic. She’s using her magic to try and sense the world outside the ship: the falling snow, the nearby mountain crags, and something else that is more . . . ominous.

So, looking at this picture the other day, I decided I didn’t like it. I thought it would be more dramatic to show Kendra with her eyes open to match that moment in the scene when Kendra realizes the ship is in danger.

Yesterday I was presenting at an elementary school and was thrilled to see that one of the projects the students had done in advance of my arrival was to draw their own versions of my characters. What’s more, they were asked to do it before seeing MY version of the same characters.

One of the characters they were asked to imagine was the terrible, fang-encrusted creature known as the skarm. Well, you probably know what my version looks like: 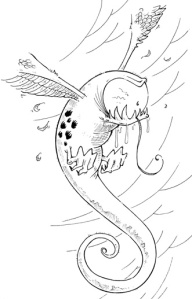 Now, here’s what the kids came up with:

Aren’t they so cute? This is what I imagine little baby skarm look like. Seriously, someone should make plush toys out of these little guys.

Oh, and just for fun, one of the students at the school drew me during the presentation. Apparently, this is what I look like when I’m drawing a monster. I have to admit . . . it’s pretty accurate.

The latest podcast is up for Authors Like Us and it’s a goody, featuring not one, but THREE authors: Meg Tilly, Don Calame, and kc dyer.

I love Meg’s book, Porcupine, and James loves Don’s Swim the Fly, but I think the thing that excited us the most about having dinner with these two is hearing about Meg’s latest experience: acting on Caprica, the spin-off of the highly-successful Battlestar Galactica series.

As you will hear in the interview, I couldn’t convince Meg to tell us whether or not she plays a Cylon on Caprica. Here’s hoping, because that would make my inner geek extremely pleased.

Don’t worry, we didn’t talk just about Cylons in this interview. You’ll also hear how about our collective artistic angst—especially when it comes to editing.

You can check out the episode on iTunes or at authorlikeus.com.

When I’m toiling away on a book, there’s nothing better than reading some good words for a past book. Kendra Kandlestar’s first adventure, The Box of Whispers, was just reviewed on this lovely blog: Ten Stories Up.

One of the issues the review brings up is the audience for Kendra Kandlestar. Are these adventures for middle-grade readers? Are they for younger readers? It’s an interesting question and one I’m always asked.

Well, I will confess that I tend to not worry about the age of my audience. I just try to write the best story. And, I suppose these adventures were really written to entertain me (well, and Kendra). You’ll have to decide if they entertain YOU. 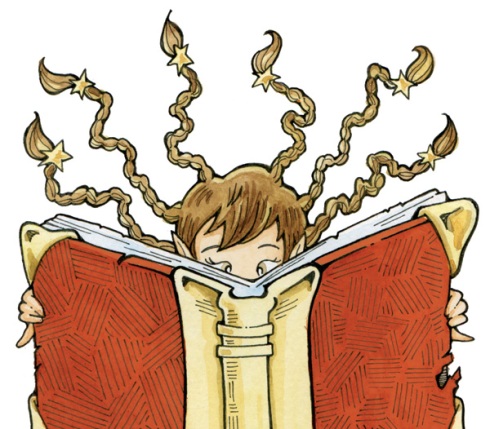 . . . but it is NOT Kendra! This is a new character for the forthcoming Kendra Kandlestar book. Let’s just call this new character “Teen Een” for now.

I’ve been working on the character—both in words and pictures—for a few weeks now, trying to really pin down her voice, her look, and her style.

I’m fairly happy with this sketch, and her part in the story is going well—so far. But I think she needs a bit more work—after all, her role in this new Kendra book is very important, so I have to get to a point where I think she is “just right.”

I’ve had a lot of library on my brain lately. I just finished inking my illustration of Uncle Griffinskitch’s library (which I recently posted) and then on Monday night, I was at the large and glorious downtown Vancouver library, where I participated on a panel of children’s authors and illustrators.

Seems like over two hundred people turned out to hear us ruminate about our careers. It was a bit intimidating at first, but of course anyone who knows me, I can be a regular Professor Bumblebean—talkative and opinionated! 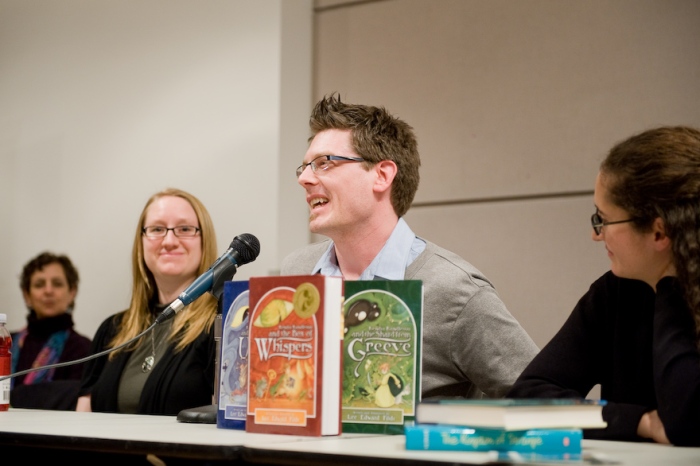 Well, here is the completed version of an illustration I did of Uncle Griffinskitch’s library for Kendra Kandlestar IV. I had hoped to complete this while I was in Korea, during my Time Travel Camp.

My students eagerly watched me as I hatched away at this for two or three days. They thought this quite a treat, but the real treat came when they go to witness one of my quintessential moments of frustration when I became so disenchanted with my own illustration that I declared it ruined. As soon as my students realized that I was abandoning the drawing they began bartering for who would get to keep the piece—alas, I kept it for myself to help me with the “redo.”

And redo it, I did. Here it is below, completed to my satisfaction (at least, I think). 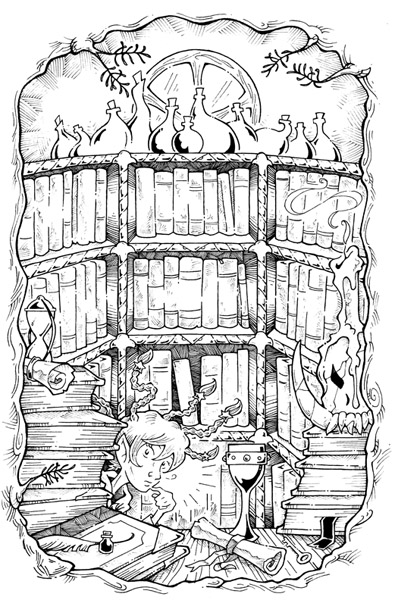 No . . . I’m not speaking about Eens! Though you will be happy to know that I’m back from Korea and diligently working away on drawings for the new book. I’ve taken a couple of weeks off from writing (due to time travel camp), but will start again next week.

On our last day in Korea, we decided to escape our chaperon, jump a cab, and see if we could make it across town to the aquarium without getting lost and having to live the rest of our days on the streets of Seoul eating kimchee. Alas, much to our disappointment, we had very little misadventure making it to our destination. But we were not disappointed by the aquarium, which is located at the giant, labyrinth-like Co-Ex mall.

We found the experience at the aquarium rather strange and wondrous. I will never forget the open shark enclosure with these tiny sharks doing laps before us and the little boys reaching out to grab their fins as they circled past. I do NOT recommend trying such a feat!

I was particularly entranced by the marvellous bat enclosure and, right next to it, there was this odd little fellow:

My teaching partner, Kallie, was quite enamored with this little two-headed turtle. Her book about a two-tailed mermaid (called The Melancholic Mermaid) is coming out this year and I think this turtle reminded us both of her title character.

Also, we found this beautiful creature called a Sea Dragon. I pride myself on knowing a lot about animals, but I’ll admit to have never having seen or heard of this magical beast. It just didn’t seem real, even as I watched it dance before me. If Eens had horses, I’m sure they would look like this.