One of the sites I was really intrigued to see on my recent trip to Europe was a memorial on the Danube River promenade in Budapest that commemorates Jewish victims of one bloody night during the second world war. The monument offers a compelling and chilling scene: a line of shoes, cast in metal, set along the river embankment, representing those who were killed by members of the Arrow Cross (a Hungarian fascist organization) on January 8, 1945. The victims—men, women, and children—were taken down to the river, commanded to remove their shoes, and then were shot along the edge of the bank, so that their bodies would fall into the water beyond.

My own grandfather was from Hungary, but had left the country before the tumult of the 1930s and 40s. Still, looking at this monument, I was reminded of some of the stories he used to tell me as a child about his growing up during World War I.  He too once had soldiers arrive at his village of Farkasgyepu. They were rounding up anyone and everyone to fight in the war, and that included the young and the old. My grandfather was just a young teen at the time, but they would have taken him if he had not faked deafness. They took away a lot of boys that day, but, according to my grandfather, none came back.

Here are a few photos that we took from the Danube River. Many visitors place flowers alongside the shoes, or put pebbles or candles inside some of them. 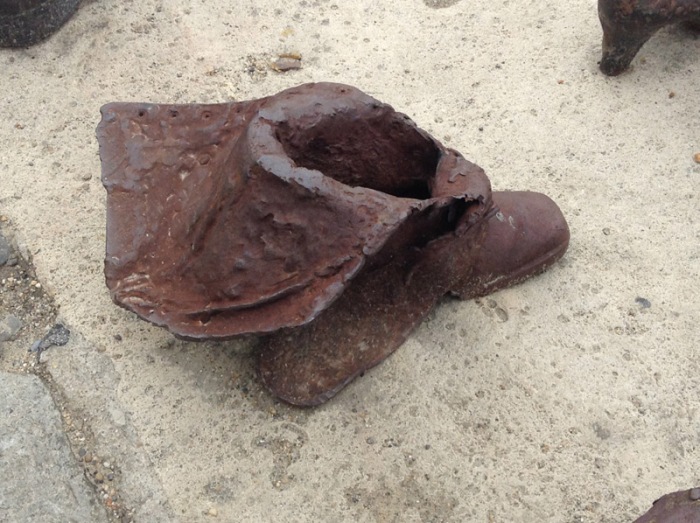 One thought on “Shoes on the Danube”