Our days in Cambodia: exploring the Killing Fields

The last couple of days my wife Marcie and I spent in Cambodia were spent exploring the Killing Fields. Even though the focus of this trip was about seeking fantastical inspiration by exploring the temple ruins of Angkor and exotic cultural experiences, we knew it was incumbent upon on to examine this aspect of Cambodia’s history. When it came to the Killing Fields, this was not about finding inspiration, but about increasing our awareness.

We made visits to two different sites related to the Killing Fields: the Choeung Ek Genocidal Center, just outside of Phnom Penh, and the Tuol Sleng Prison Genocide Museum, which is located within the city itself.

Both visits were difficult experiences. That probably goes without saying, but our visits coincided with the storm coming out in the news of certain presidents referring to developing countries as “sh*thole countries.” There’s been a lot of debate about what was actually said, but to me, it’s not the specific words that matter—it’s the sentiment. And that unthinking, unfeeling attitude pervaded my thoughts as we trudged through the grounds where thousands—thousands—of people were killed because they did not fit a political leaders view of what fit. Men. Women. Children.

I had read quite a bit about the Pol Pot regime in Cambodia and, in preparation for our visit, had rewatched the 1984 film The Killing Fields. Still, nothing had prepared me for our visit.

I knew that there was a memorial “stupa” at the Choeung Ek Genocidal site, and that it was filled with the skulls and bones of victims. I had seen photos online. The ones below are the ones we took: 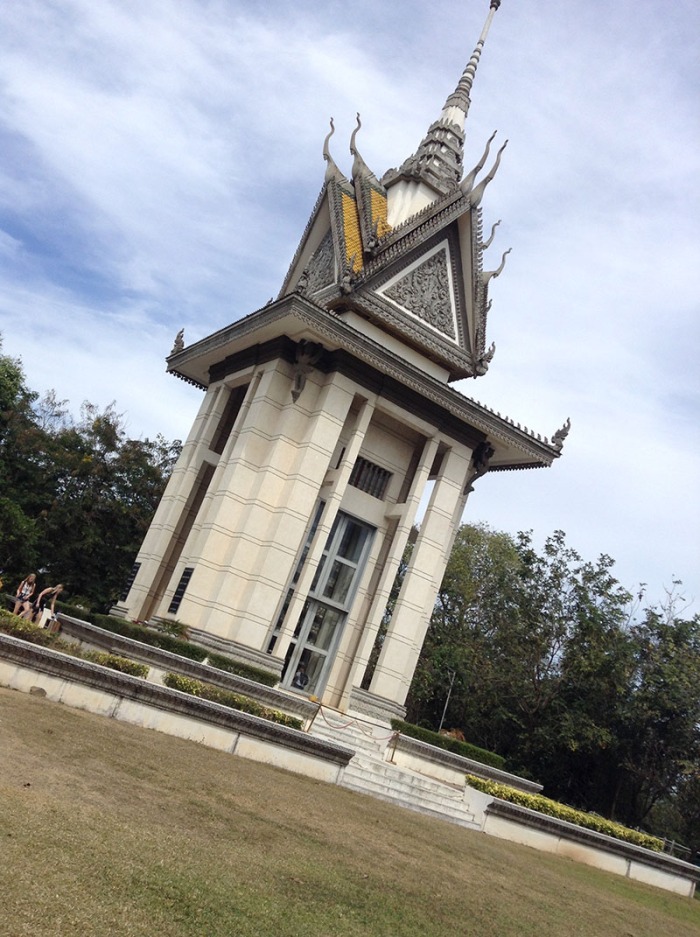 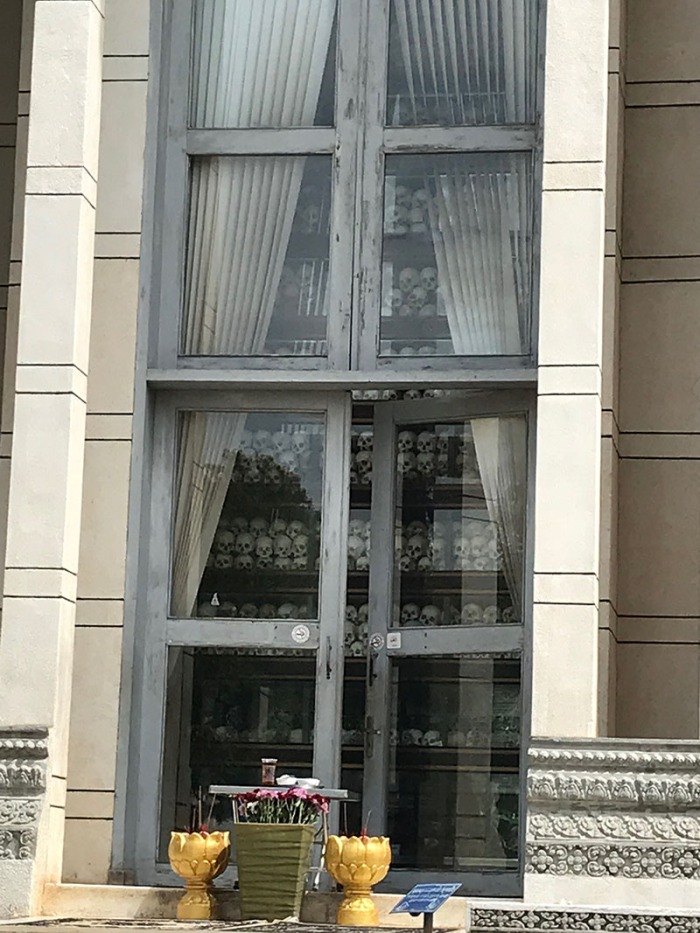 The bones and skulls have all been exhumed from the grounds. They are all real and grimly categorized by researchers who have tried to determine the sex of the victim and the means by which they were killed. There are over 5,000 skulls in the stupa.

So, yes, I was prepared to see the stupa. But what I didn’t know was that the grounds themselves are still scattered with human remains. It’s a testament to just how many people were slaughtered there between 1974 and 1979. Cambodia lost one-quarter of its population during the time and there are dozens of killing fields scattered throughout the country.

Choeung Ek was one of the main killing fields and because there are so many bodies buried there in mass graves, human remains are still rising to the surface. You can see them as you walk about—bones, clothes, teeth. They boil to the top of the ground, especially during the rains. It’s overwhelming, shocking, eerie, and heartbreaking to see them as you tour the place. There are not just one or two. They are everywhere.

There are so many in fact, that the caretakers go through every few months to gather the ones that come to the surface. There are many display cases throughout the site, containing rags and human remains, and even on top of the cases there are piles of bones and teeth, newly-discovered and waiting to be put away.

There are many specific horrors described on the tour. We found the ones involving children and babies especially difficult to comprehend and absorb. Actually, I’m not sure we have absorbed it yet.

And now? The site is quiet, green and peaceful. Chickens wander the grounds. There are cattle grazing beyond the fences. Blossoming flowers. The shallow depressions in the ground, the remnants of the mass graves and the scattering of bones and rags are the only things that reveal the tragic nature of the site.

After visiting Choeung Ek, we climbed into the tuk-tuk we had hired for the day and headed back into the city. We were actually meant to visit Tuol Sleng Prison afterwards, but when our driver pulled up, we just didn’t have it in us to do it. We had our driver take us back to our hotel and worked up the fortitude to visit the prison the following day.

The Tuol Sleng Genocide Museum is situated in one of the most famous prisons that was used during Pol Pot’s regime. It was once a high school, converted into a prison and torture chamber. People did die here, but that was never the regime’s intention. This was meant for detention and interrogation. It’s estimated that between 12,000 and 20,000 people were imprisoned at Tuol Sleng (also known as “S-21”). Many people, after torture, were sent to the Killing Fields to die. There are only twelve people confirmed to have survived the horrors of the prison.

I’m glad we went to Tuol Sleng, but I’m also glad we didn’t do it in the same day as Choeung Ek. It allowed us to manage it emotionally and to give us a fighting chance to absorb it.

Here, you can see the prison cells and torture chambers, many of them in the exact same condition as when they were first used.

Rooms once used to educate high school students were converted into individual or mass cells, hastily built with wood or bricks. Holes were punched crudely into the walls to allow guards to see down the entire chain of cells. Many of the floors are still stained with the result of gruesome torture. 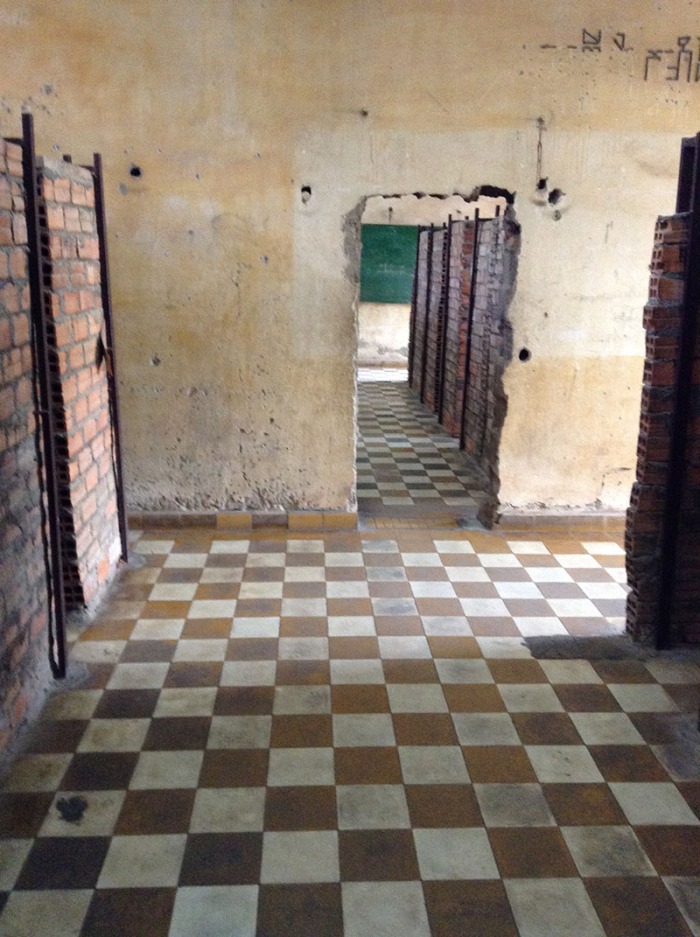 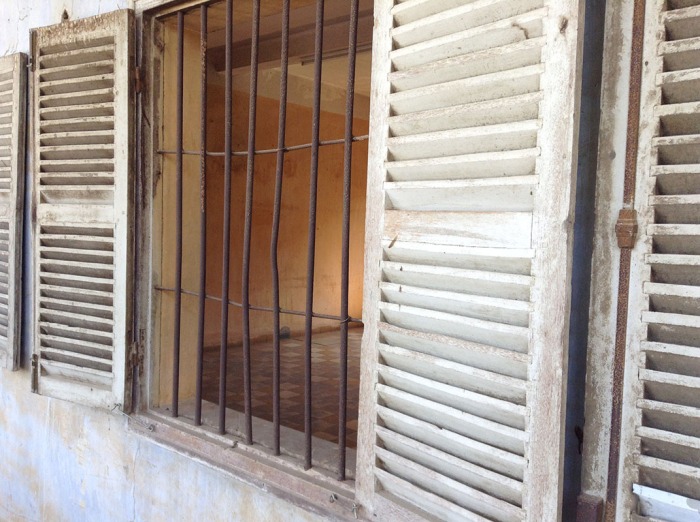 There also many rooms in the buildings that showcase exhibits related to the genocide. One of the most overwhelming aspects are the photos—there are hundreds of them, the mugshots of the people who were detained there. Every single prison (man, women, and child) were photographed and catalogued. You can see into their eyes in the photos—going to Tuol Sleng, it’s impossibly to escape the grisly reality of the genocide.

And that is a good thing. Nothing about the prison—or Choeung Ek for that matter—is sanitized.

Marcie and I are still thinking about our visits to these places and trying to rectify the Killing Fields with our other experiences in Cambodia. We have found the people here so friendly, kind, and generous. How can this possibly be after having gone through such atrocity?

When we attended a show of cultural dancing, the host of the evening said that it was Cambodia’s hope to be known for its art, and not the Killing Fields. That made me ponder. In truth, the first thing that always popped into my head about Cambodia was the wonders of Angkor. And I think that will still be the case in the years to come. When I remember our time in that wonderful country, I think I will dwell on the temples first. But it is certainly hard to not think of what we saw at the Killing Fields.

My former student, Dona, is currently volunteering in Cambodia and learning more about it’s culture everyday. After parting with her, she messaged me to say, “I hope that you two had a good time in Cambodia and find inspiration but also knowledge on how this country has been shaped and continues to persevere. I hope you take back your learnings to the communities you meet everyday.”

Such a wise person (and isn’t it humbling when your student becomes the teacher?). Perhaps what I will take away from Cambodia is not a visual memory, but an emotional sentiment: Empathy.

Lee Edward Fodi I’m a children’s author, illustrator, and specialized arts educator—or, as I like to think of myself, a daydreaming expert. I'm the author of the Kendra Kandlestar series and The Secret of Zoone. During my free time, I'm a traveler, adventurer, and maker of dragon eggs. I live in Vancouver with my wife, son, and unhelpful cat.
Published January 18, 2018