I’m currently teaching a creative writing class that takes inspiration from our individual family stories. As part of the curriculum, I decided that I would have my students start memory boxes. I’ve bought each of the students a craft box made out of wood, so that they can paint and decorate it to suit their personality. What they put in it is up to them, but I hope it’s something that they will keep.

Of course, opening a memory box is the type of thing that can really prompt recollection… and stories. So, in order to help connect with—and inspire—the students, I decided to dig through my crawl space to discover my own memory box.

Because I knew I had one somewhere. I also knew I hadn’t opened it in eons; I had dutifully shifted it from apartment to apartment, home to home, throughout my life, mostly just cramming it away in the corner of some dark storage area. In my imagination, it was just an old and battered shoebox, its corners held together with tape.

I found the box in the utmost furthest depths of my crawlspace. It wasn’t a shoebox. It was much larger and a quick peak under the lid in the flashlight-illuminated darkness revealed a treasure trove of mementos.  So I tugged it out, navigated back through the obstacle course that is our crawl space, and brought the box into the light. 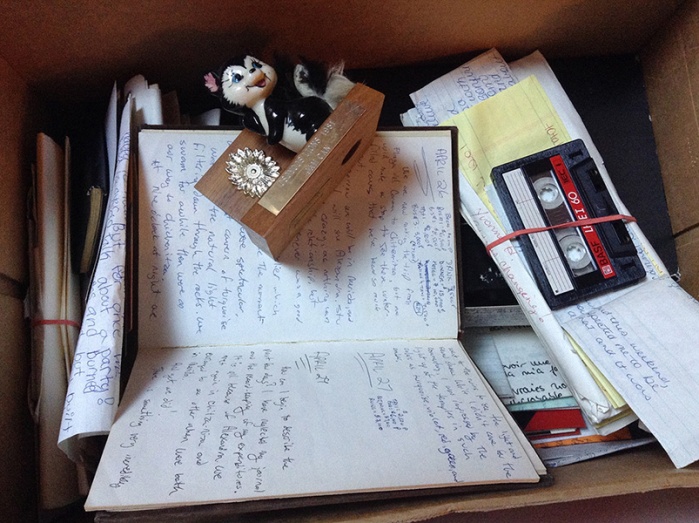 Inside was a journal chronicling my trip to Central America in my early twenties, a skunk trophy I won when I was in Elementary School (for being on the worst curling team—yes, this is LONG before the culture of everyone earns a participation ribbon), old photos, an unpaid cable bill, and countless letters.

Most of the relics in the box were over twenty years old, though some (like the skunk trophy) even more ancient. As I rummaged through the contents, I found one particular object that piqued my curiosity: a cassette tape attached to a stack of letters with an elastic band. I had no idea why this tape was in this box; I had no recollection of it whatsoever. I yanked the tape free of its parcel then promptly forgot which stack of letters it had belonged to. The only way to really figure out what the tape was about was to listen to it.

Luckily, my wife still has an old tape player stuffed away in our storage (she refuses to throw it out, despite my nagging). So I procured the player, stuffed in the cassette, and began listening.

It was a girl’s voice, but I had no idea whose it belonged to. I thought maybe it was my sister. Or maybe my cousin. I even wondered if this tape had belonged to someone else and just ended up in my box of memories by mistake. But then I heard the girl say my name; she was speaking to me directly.

And then, suddenly, I knew who she was.

I grew up in a very small town. I think my graduating class had all of 50 people. I always laugh when my students ask me how I chose my high school because the truth is that I had no choice—there was only one option available to me, the only school in town. It was the type of town where the school body didn’t change much. Oh sure, a few people came and went, but it was the type of town where 80 per cent of the people you started Grade 1 with were then when you graduated from Grade 12.

For me, Yvonne was one of those people.

I met her in Grade 1, but it wasn’t until I was in high school that she and I became fast friends. That’s when my family moved to the other end of town, her side of town, which meant we took the bus everyday together—or, once I had my license, the car.

Our relationship was not always a simple one. As is so often case in such a situation, the line between friendship and romance was often blurred. We went to movies together, starred opposite each other in school plays, did projects together. I remember many weekend nights when we would drive up to the desert in my old ’66 Ford Custom. It was a behemoth of a car; the trunk was so long and wide that we could sit on it, backs against the rear window, and our feet wouldn’t even dangle off the end. We’d sit there, contemplating the stars, and do what all young people do: share our hopes and ambitions. The town was small, but I feel like on those night, with the desert sky beaming above us, that the world seemed vast and endless . . . and possible.

In those days, Yvonne and I knew everything about each other that there was to tell. We talked almost every day. I knew every nuance of her expression, the cadence of her voice, the ups and downs of her demeanor. I guess that’s the way it is with best friends.

When high school came to an end, Yvonne and I went our separate ways, chasing dreams. For those first couple of years, we were still very close. We wrote each other often, sharing correspondence and the luster of our exciting experiences in new places with new people. We even attempted a formal relationship at some point, but it was mostly long distance…and by that time—well, we had more distance between us than physical space. We had simply grown apart. This time, when we went our separate ways, it was for good.

Through the next few years, I lost touch with Yvonne. We didn’t write, didn’t talk on the phone. From time to time, I heard about her through mutual friends, things such as she had fallen in love, she had gotten married, she had given birth to a daughter. Whenever I received these tidbits, I was genuinely happy for her . . . though, I must also confess that it was sort of like hearing about someone I didn’t know, like a character in a story I used to read as a child. Yvonne really wasn’t a factor in my present life—so I simply didn’t dwell on her.

More years passed. I was twenty-five and living in the city with another childhood friend, Mike. We were doing well, two young men with professional jobs, a nice apartment, and steady girlfriends. Mike was good friends with Yvonne’s stepbrother, so he was the main conduit for news about her.

One winter’s evening, the phone rang for Mike. He ducked into his room, talked for a few minutes, and came out looking like someone had run him over with a truck.

“I have to tell you something,” he said, leaning heavily on our kitchen table. The hesitation was heavy in his voice.

“What is it?” I asked impatiently.

I remember feeling confused and bewildered. I remember Mike continuing to talk, but it was suddenly like we were under water; I couldn’t hear anything. But, eventually, I came to the surface. I remember asking, “So. Is she okay?”

Mike looked at me with discomfort, almost frustration. “No, she’s not okay, Lee. I’m trying to tell you. She shot herself.”

It’s hard to express the turbulent emotions that I experienced after receiving this news. I remember a gamut of feelings—confusion, anger, guilt. But mostly anger. I became determined to not dwell on the matter. I didn’t even go to Yvonne’s funeral. I refused to reflect on my relationship with her or to play the games that everyone else wanted to play—exploring the whys and hows of her death. I didn’t go back and look at old photos, examine old memories, or get in touch with anyone about it. I didn’t want to know.

Simply stated, I put it all away. My mementos from Yvonne were stuffed away in that box, and that’s where they stayed. I never opened that box, except to put other stuff on top of it.

I thought of her no more.

The years continued to pass—an entire decade, then another. Life carried on. Every now and then, Yvonne popped into one of my dreams or crossed my mind. She was still a girl to me—frozen in time, locked at the age of twenty-five or in some cases younger, sitting on the back of my car, talking about her hopes and ambitions. Sometimes, I would catch myself perusing facebook, looking at the posts of other old friends, and wonder what had become of Yvonne and what she was doing these days—only to suddenly remember with a sharp pang of guilt that she was gone, and had been for a long time.

Maybe this is because I had refused to really deal with her death. I don’t know.

But then there was the discovery of the tape. Listening to the full cassette revealed that Yvonne and I not only wrote each other letters, but we taped them. She mentions as much in her recording, telling me that she can’t find the tape I had most recently sent her so, instead of recording over it and sending it back to me, that she’s starting a new one. So there’s that mystery solved.

Still, finding—and listening—to the tape was so very strange. It wasn’t quite like finding an old forgotten photograph or a video clip of us. It was a message from her, directly to me, same old same old—her talking about her plans for her future, her desire for happiness and love.

That part to me is heartbreaking. But mainly I feel gratitude for hearing the sound of my friend’s voice again, the one that had evaporated from my memory. It certainly wasn’t the healthiest of decision to pack away my emotions . . . but I am at least thankful that I packed away the relics, because they allowed me access to something all these years later.
And that is why I’ll have my students make their own memory boxes, too.

3 thoughts on “Telling our family stories: The Forgotten Voice”