Day 3 in this city was my last full day, so I decided to try and make the most of it by swooping in on anything I might have missed.

I began by visiting the Marguerite-Bourgeoys museum at the Notre-Dame de Bon-Secours chapel. We had paused here during my ghost tour, so I thought it would be worth it to come back and explore the inside of the chapel. Once I found my way around the construction (I’ll repeat, Montréal seems to be currently under siege by every construction company in eastern Canada) and through the door, I learned that there was both a crypt and an upper balcony to explore, so decided to pay the fee and explore.

I was not disappointed!  The museum is focused on the life of Marguerite Bourgeoys, a famous daughter of the city. She founded the first uncloistered religious community in the Catholic church and was instrumental in educating girls, the Amerindians, and the poor in New France.

I won’t say too much about the life and times of Marguerite Bourgeoys—you can read up about her! But I will post this picture of, which is her “true” likeness: 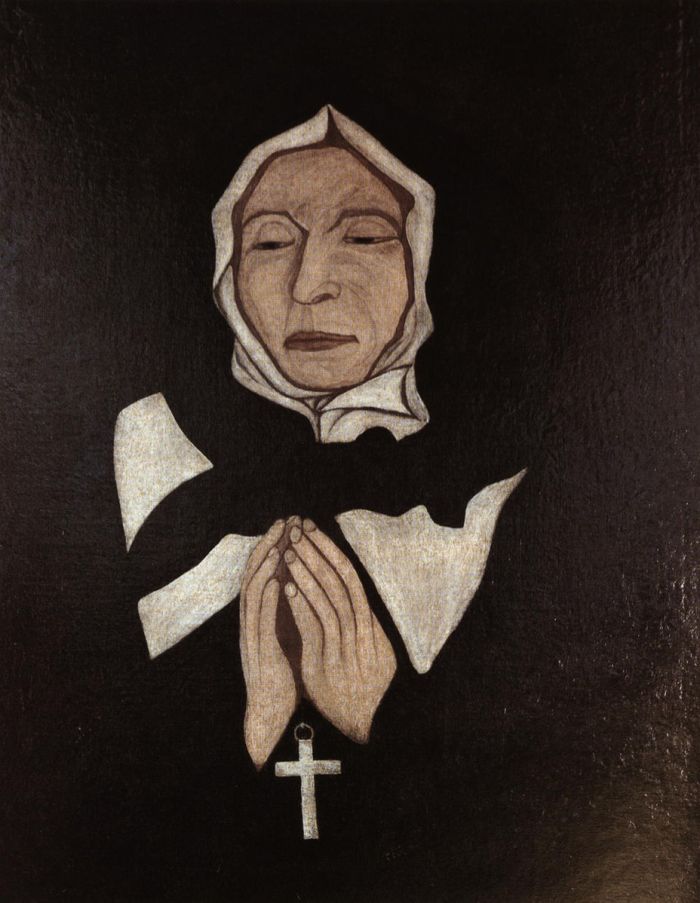 The portrait was painted immediately after her death in 1700. The picture was painted over, and so there was a contentious time in the early 19th century when people argued over the authenticity of the likeness. Eventually, the painting was painstakingly restored and the true likeness revealed.

My two favourite parts of the museum were the top and the bottom (this is always the case with me when I visit old churches). In the crypt below the chapel, you can see the early foundations of the original chapel, which was destroyed by fire in 1754. Photos were not permitted in the crypt, but I could take them from the top, where I stood by the angels and the belfry and gazed at the Saint Lawrence.

After a quick lunch, I carried on to a second museum, which was at Pointe-À-Callière. This is the “birthplace” of Montréal, for it is the site of the original fort. Actually, many different buildings stood at this point. Now it is the museum, which looks like this: 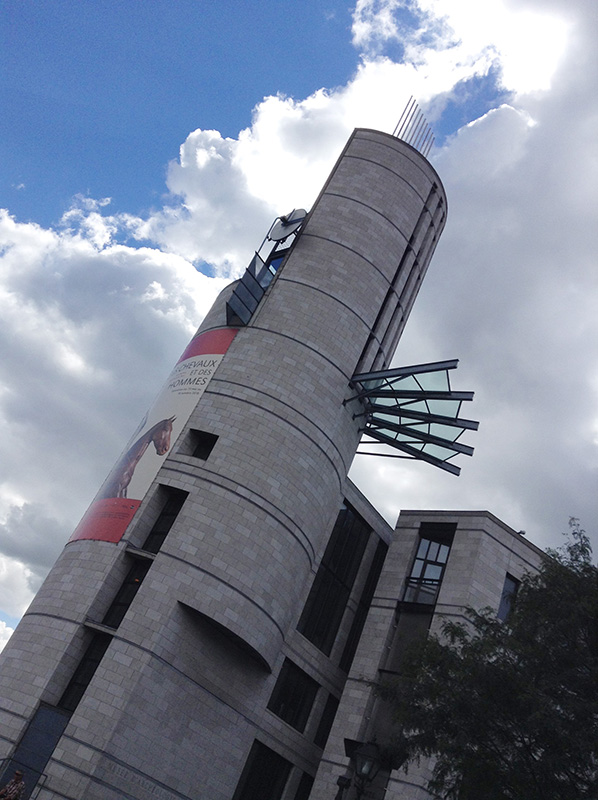 The exhibit is mainly underground. After watching a very good multimedia show detailing the history of the city, I descended into the exhibit and wandered the early cobblestone streets. This is an authentic archaeological dig, so the floors are uneven and all the stone foundations and accompanying fixtures you see are the originals. 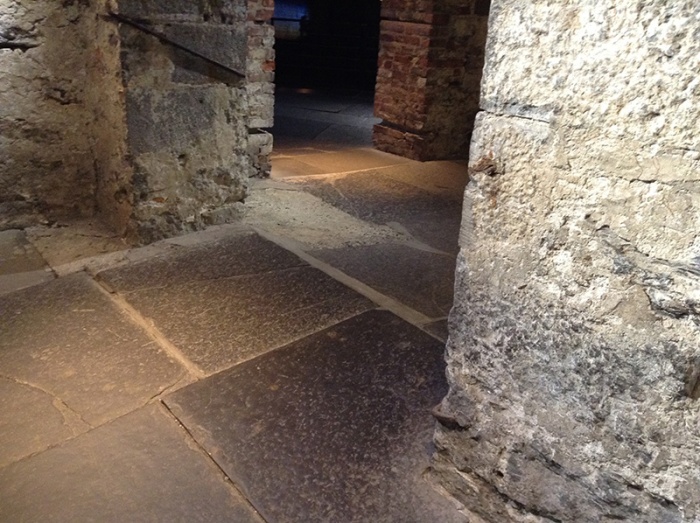 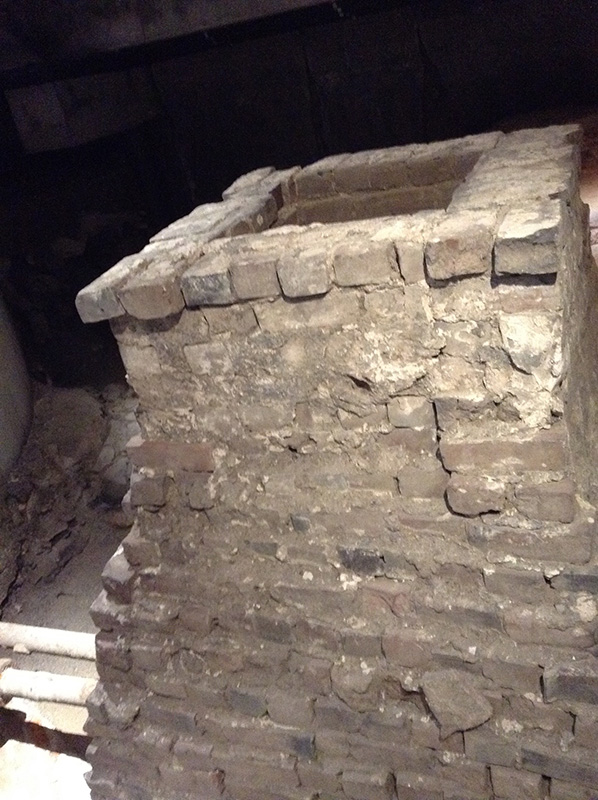 I saw remnants of the old sewer system, the ancient fort wall, and even the exhumed graveyard. 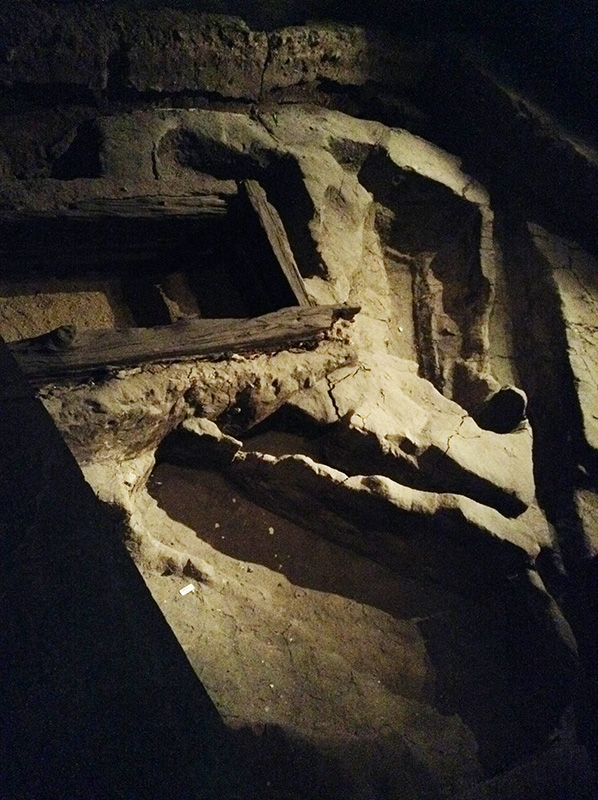 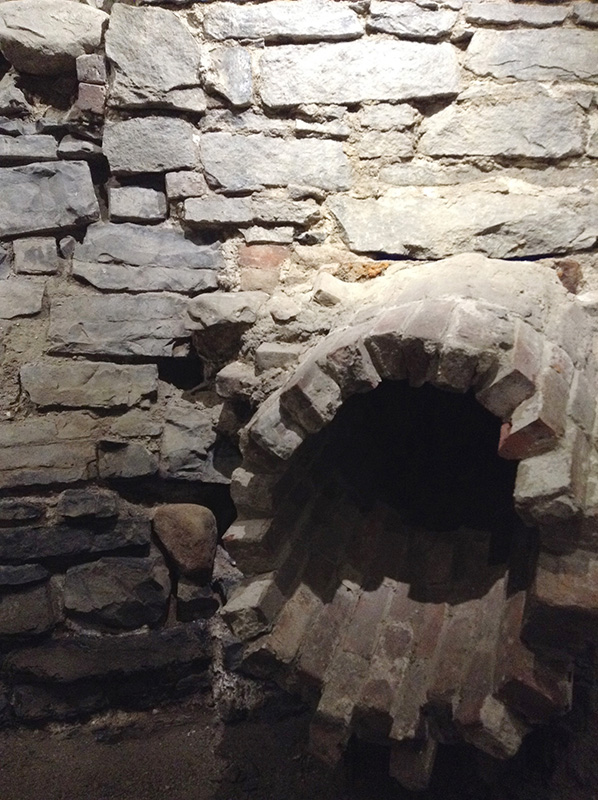 It was very neat to explore the foundations down there while the modern city bustled above, unawares.I like to spend a lot of time on world-building in my books, so this experience was very inspirational, helping me to imagine how a city and a culture evolves.

The exhibit featured a lot of relics from the past. My favourites, by far, were an old key and elephant escutcheon. 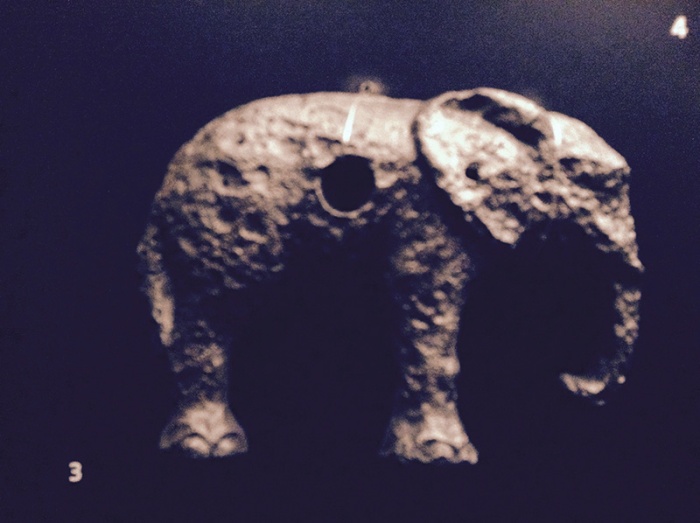 I confess that I did desire to possess them. So it was probably a good thing they were behind glass and under . . . er, lock and key.

At the end of the exhibit, I climbed the stairs and explored a temporary show that the museum was hosting: “Des Chevaux et des Hommes” (Horses and Men). This exhibit features some 250 objects on loan from the Émile Hermès Collection in France. The grand finale was a GORGEOUS life-size sculpture of a pegasus by Christian Renonciat. The detailing was incredible, especially in the wings.

After this exhibit, I wandered around Old Montréal some more, taking in Rue McGill and Rue Saint-Jacques. I visited the Bank of Montréal headquarters. Founded in 1817, it is the oldest bank in Canada.

Everything inside was quite luxurious, include the front door and the ceiling . . . 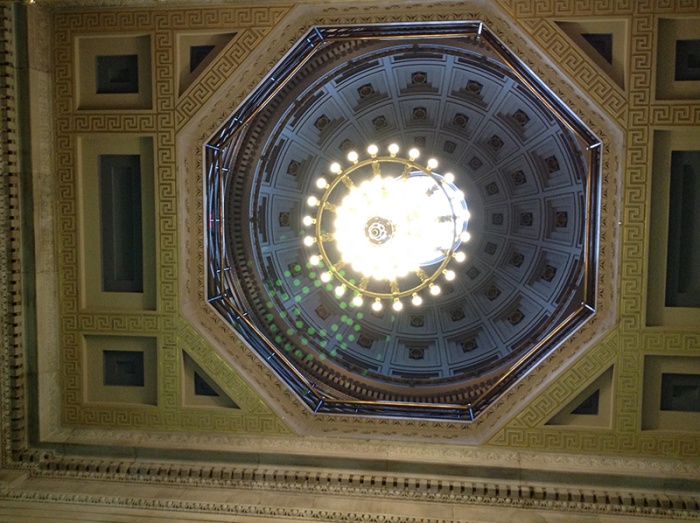 There is a small museum inside that is worth visiting. You can learn about the history of Canada’s first bank and also see some old equipment, such as a telegraph machine, a cheque writer, and a heavy-looking “pencil pointer” (sharpener).

A kind local told me to check out the Aldred Edifice, which is an art nouveau-style building located on Place d’Armes, near the bank. She advised me to go through the door and check out the elevators. So I did! 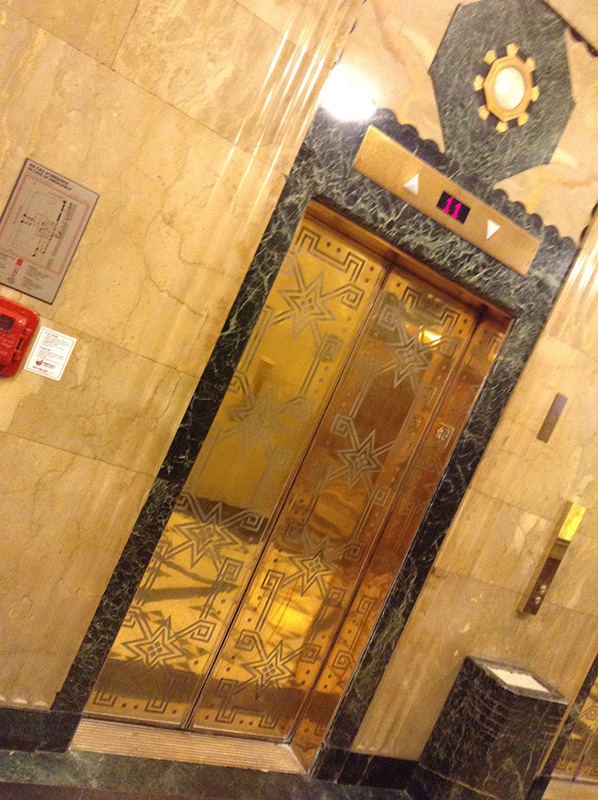 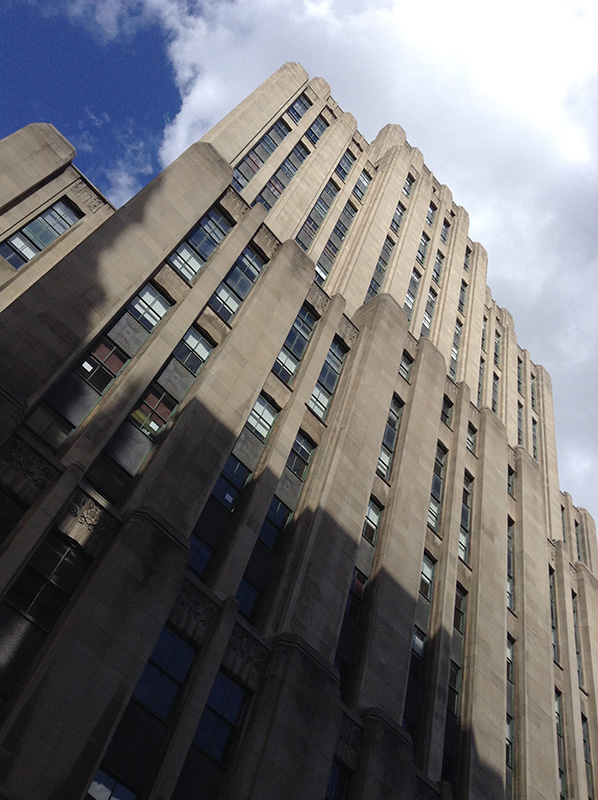 Right next to the Aldred Edifice is the brick NY Life Insurance building—otherwise known as Canada’s first skyscraper, with all of eight floors. It looks dwarfed these days, but it still is a pretty building, especially with its distinctive red bricks.

The day ended with meeting up with some good friends who are also visiting Montréal from back home. Rob and Sarah are dropping off their daughter Brianna at Concordia University, so it was neat (and a little surreal) to see good friends we see often, but in a city on the other side of the country. It’s their family tradition to take a “bad” selfie, so I obliged:

We ate at a really good gluten-free restaurant called NINI Meatball House. Obviously, the speciality is different styles of meatballs. I had the buffalo chicken with blue cheese sauce, and they were divine.

This was the moment I especially wished Marcie was here! But she is on her way and will get to spend a half-day with me in Montréal before we take the train to Québec City and spend a few days there. So the trip is soon about to get “Marcified”—which means a lot more quirky and fun (because that’s how my wife rolls).

Well, as usual, I collected a few details from throughout the day: doors, sculptures, windows . . . so here they are: 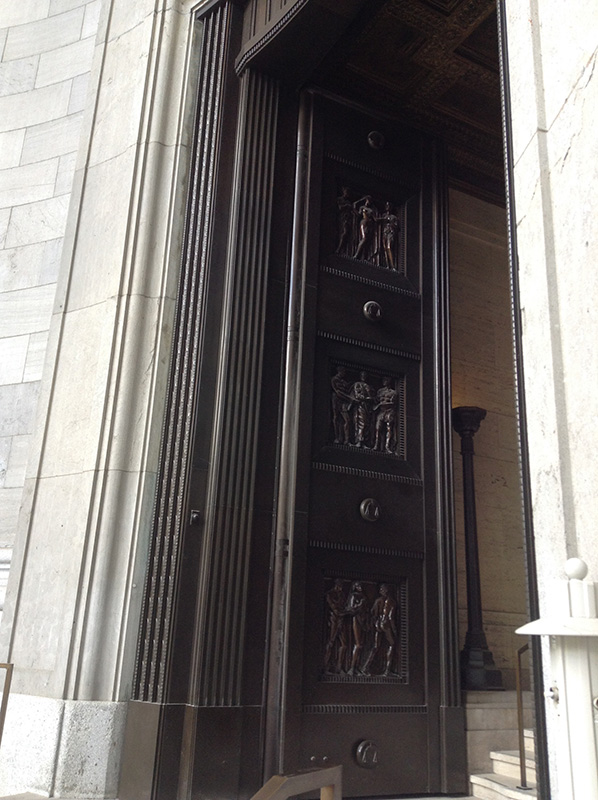 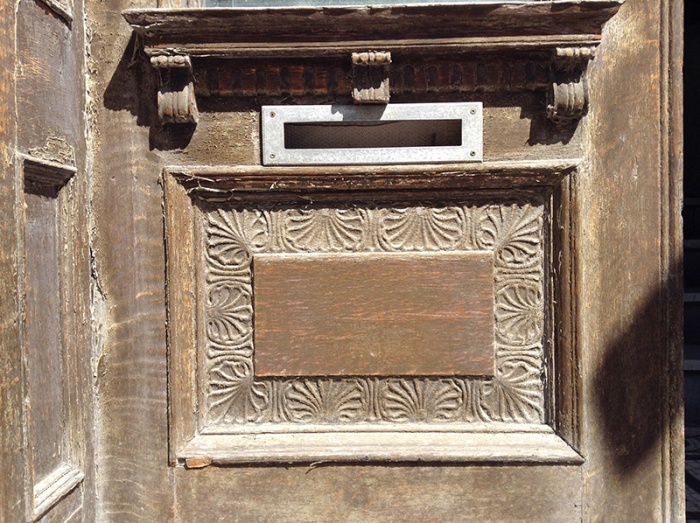 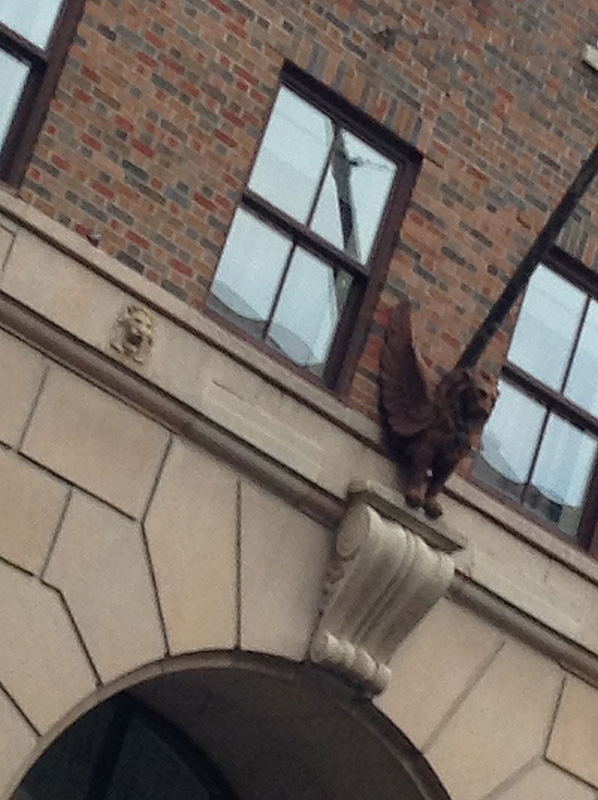 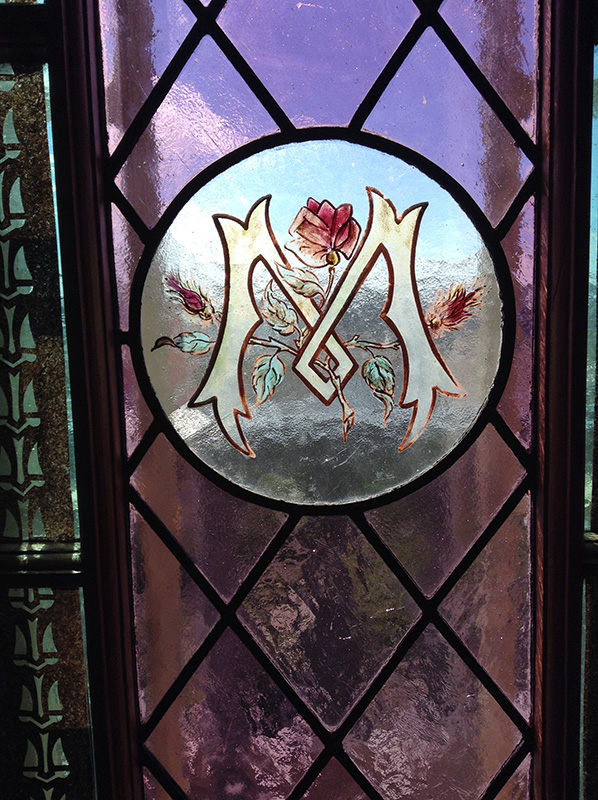