After a busy day exploring Vieux-Montréal yesterday, I decided to head in the other direction today and go explore the Museum of Fine Arts.

It was a bit of a trek, but I love exploring a new city that way, so off I set up (or down?) Rue Sainte-Catherine. The main problem with walking is that you can continually be distracted, so inevitably delay arriving at your destination.

Such was the case today; many doors, gargoyles, and other whimsical details called out to me as I traipsed along. Of course, you have to be careful with gargoyles; they don’t often have anything nice to say!

The first place I paused along Rue Sainte-Catherine was St. James United Church.

I especially adored the impish poses of these little dragons: 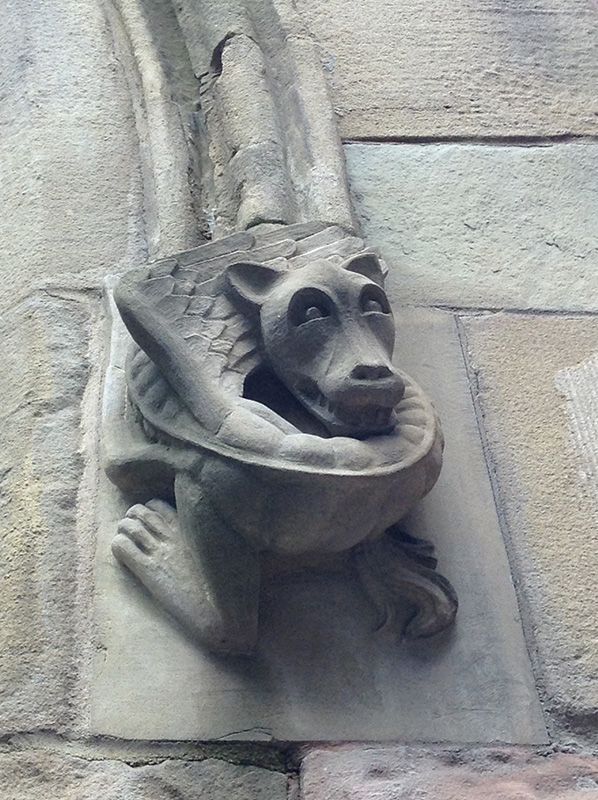 Next, I came upon Christ Church Cathedral. It had a beautiful red door: 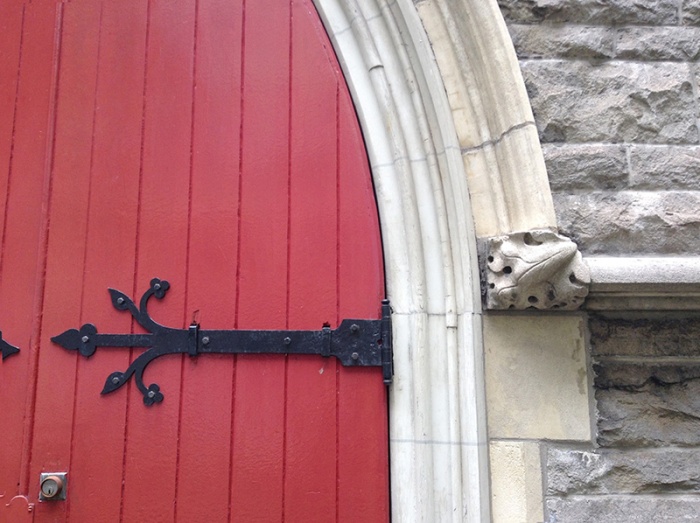 It was guarded by these dog-like gargoyles. They looked very earnest.

I also discovered this door, somewhere along the street. I can’t remember exactly where; it might have been at the diocese behind the church . . .

And then there is this face, and I can’t remember exactly where I caught him, either. I just remember wandering through an archway and discovering him tucked away in a corner.

Well, I eventually arrived at the fine arts museum. Like everywhere else in Montréal (or so it seems), Rue Sherbrooke, where the gallery is located, is under complete siege by construction crews. Eventually, I figured out how to navigate my way inside. My original intention was to only view the main collection, but once I was at the ticket booth, I decided to cough up for the special exhibition on Pompeii (it was only an extra $8).

I’m glad I decided to do this; it was an extensive exhibit, with many relics and artifacts recovered from the eruption of Mount Vesuvius in 79 AD. The thing that struck me the most were the moulds taken of many of those who perished in that disaster. A layer of fine ash fell on the bodies, hardening and encasing them in a porous shell. The bodies decayed and leached away over time, leaving behind perfectly preserved cavities in the rock. By pouring plaster into these holes, archaeologists were able to capture the postures of the victims. They have many of these moulds on display—you can see men, women, and children all . . . but for some reason, the one that struck me the most was of this dog caught in its last agonizing moment of life:

Seeing these moulds, really hammered home the reality of the disaster—much more so than the various animations and immersive films they showed.

After exploring the Pompeii exhibit, I continued on to other parts of the museum. I studied art history, and especially Italian Renaissance art, in university, so I eschewed the Canadian wing of the museum for the European galleries. I enjoyed the works by all the famous international artists—I saw plenty of Picassos, Monets, Gainsboroughs, and Latrecs—but afterwards I still had some energy so decided to trek down and ferret out the Canadian works.

I’m sure glad I did. In fact, this was my favourite part of the gallery, probably because my familiarity with most of these works is so lacking. I didn’t do all the floors in order, which meant that the very first painting I saw was this amusing, whimsical piece called The King’s Beavers, by Kent Monkman:

In Canada, I think we are self-conscious of having this little critter as a national symbol; we adore him, but perhaps think of him as a bit comical, especially in comparison to the intimidating bald eagle to the south of us. Perhaps it is the same with this painting; I found it to be both ridiculous and profound at once. It captures a lot about Canada, I think, speaking to the violent iniquities of colonialism, and the legacy that it has left behind. Notice that this is not simply a depiction of the harvest of beaver pelts; this is an extermination! One poor fellow has been tied to a stake and summarily dispatched execution style. Furthermore, the artist chose to anthropomorphize the beavers, showing them in human acts; a pair is caught in a moment of supplication to the heavens, while others languish in their water-bound prison. Still, others float in the clouds, presumably on their way to some sort of beaver heaven! There is also an environmental message here. Sky, water, and land are all depicted, yet we soil them with our behavior; as the human figures slay the beavers, symbol of Canada, we slay ourselves. Look to the far left, and you will see the trinity of human compulsions depicted by the blade, the money bag, and the cross.

Here are the some of the other pieces I really enjoyed (in no particular order):

The Ice Cutters, by Horatio Walker 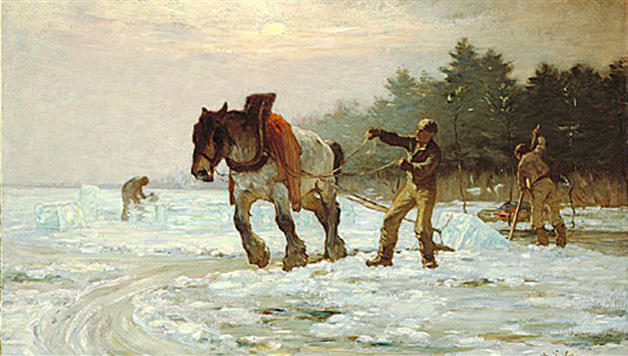 Eventually, I made it out of the museum, but not until mid-afternoon. I had been so entranced inside, that I had lost track of the time and realized I hadn’t eaten. So I decided to head to Schwartz’s Deli to grab a bite. If you ever mention to someone that you are going to Montréal, they will most likely respond to you by telling you that you must go to Schwartz’s Deli. In fact, I think it might be some sort of municipal law that tourists must go there. So I decided to make the fairly long detour from my route back to my hotel.

Along Rue Sherbrooke, I discovered a few more interesting details. Because of the protests from my rumbling stomach, I resisted all of them except for this blue door:

I had heard about the long line ups at Schwartz’s Deli, so there was no doubt that I had found the right place up on Saint-Laurent Boulevard when I spotted the crowd. Since I was on my own, my wait was only about ten minutes; as a “single” I could take my place at the diner’s bar. Here I got to enjoy my sandwich and watch the cooks slice and prepare the giant slabs of meat.

Yes, it was delicious . . . and I guess that’s why everyone says you have to go there.

After a few hours’ rest at my hotel, I headed back into Old Montréal to get a late dinner. I decided to go to Le 3 Brasseurs (The Three Brewers) because on the previous night the guide on my ghost tour said the building was haunted. Apparently, there was a fire in a previous age and 20 people leapt from the top-story windows to their agonizing death . . . 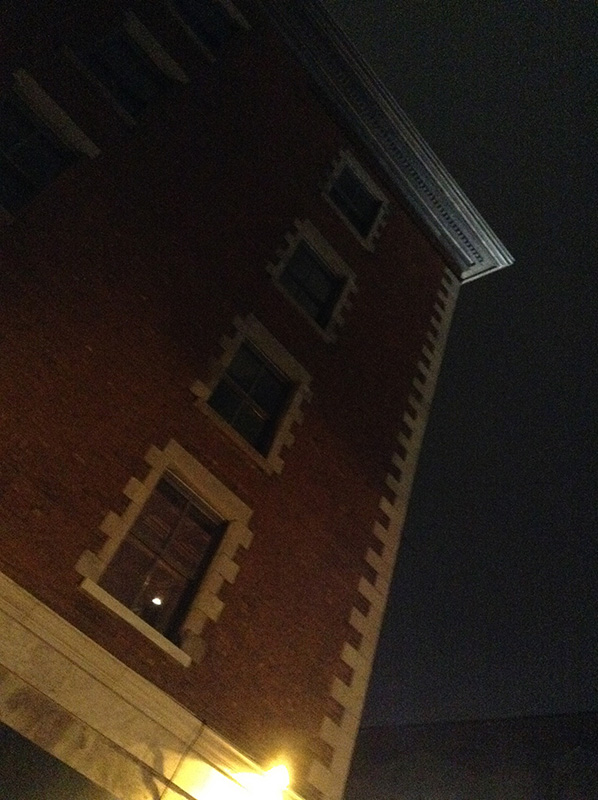 Nowadays, there are stories about restaurant patrons hearing people making noises from the floors above, even though those floors are now completely abandoned and empty.

I didn’t detect any ghosts during my meal, but I did enjoy my “flammekueche” which is a traditional dish from northern France. It’s a lot like pizza, but with a delicious thin crust. 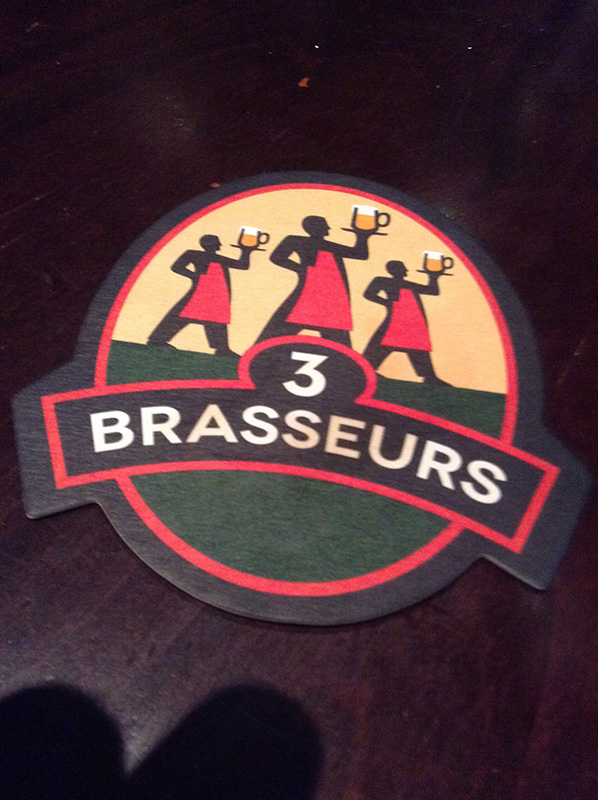 Afterwards, I walked back to the hotel and admired the beautiful lighting of the historic City Hall; a pretty way to end the evening!