Today marks the half-way point of our “inspircation”—our inspirational tour through the UK and Ireland.

Great things have been happening creatively for me, and since I’ve been on this tour I’ve even agreed to an amazing project for when I return back to work in the studio. And, wouldn’t you believe it, the theme of that project is “travel.” So the universe continues to do its work.

But that’s the future! As for today, we spent it exploring the city of Bath and enjoying some arts and culture.

Our day began with a tour of the Roman bath houses. Our host at our B&B advised us to get an early start, so as to avoid the larger tour groups. This was good advice; we arrived by ten, just in advance of the first large group. This meant that we could enjoy the site amidst a relatively sparse crowd, allowing us to take lots of great photos and linger at the baths themselves.

I love this particular photo, which shows the main bath and the abbey in the background. In Roman times, this bath house was covered, first with a wooden roof, and eventually with stone. Now, as you can see it is open.

The bath house truly is remarkable. This is most likely the oldest site I’ve ever walked through since my time in Egypt many years ago, and it truly is humbling. So much of the structure is still intact, still working the way it was designed all those hundreds of years ago. Here are some other photos of our exploration . . . 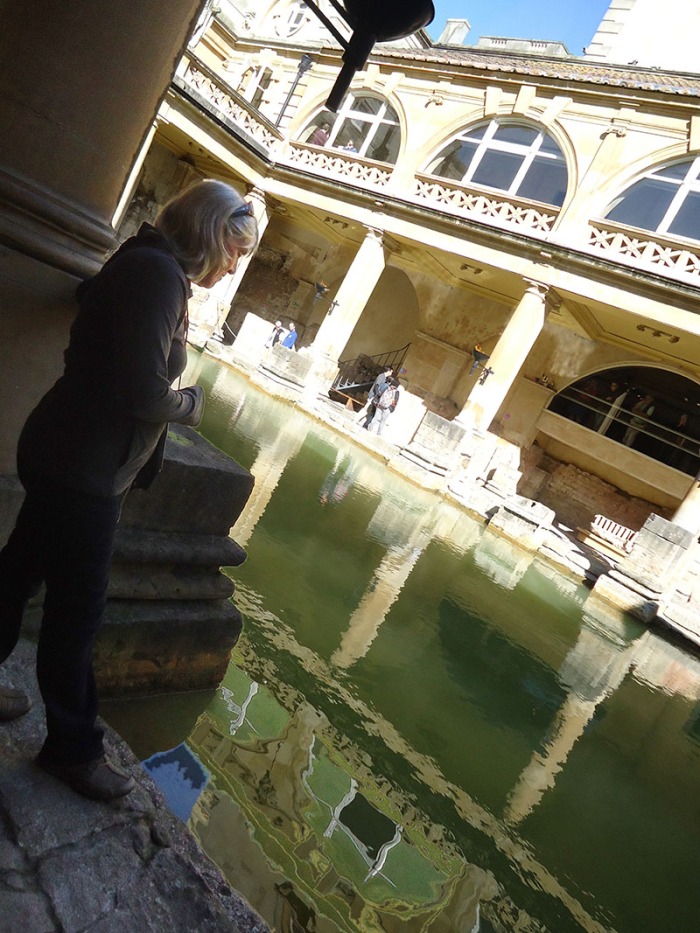 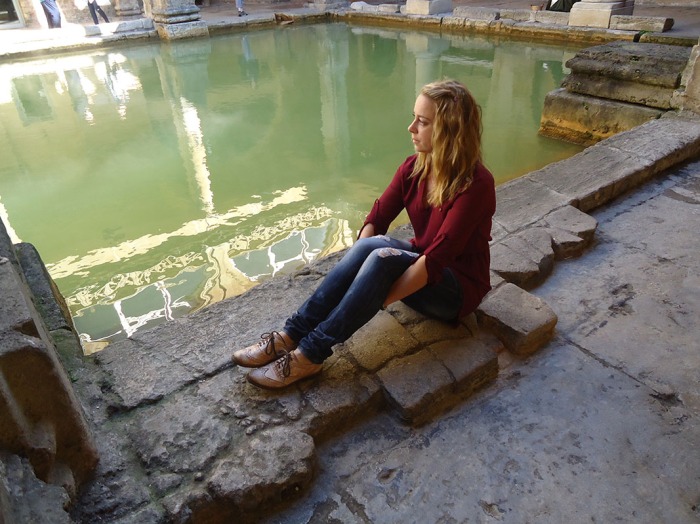 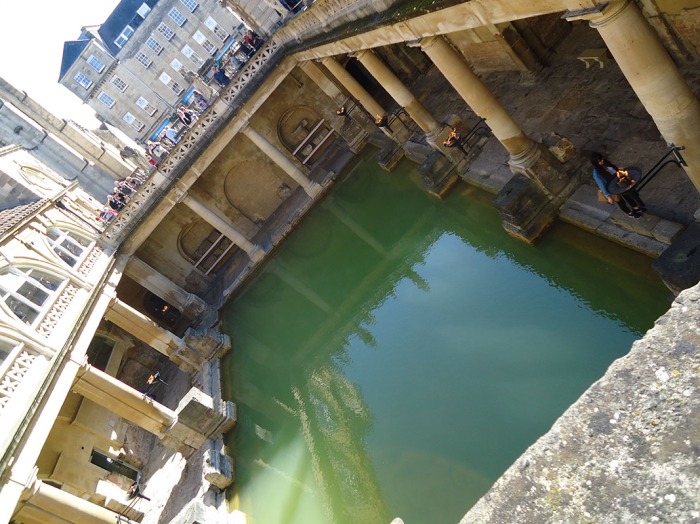 You’re not supposed to touch the water, but, of course, my mom did. (If it’s not her, then it’s Marcie—they seem determined to defy all the no-touching rules.) Thankfully, we avoided a lecture from any number of attendants lurking about the site.

Below is a photo showing the structure of the subfloor. Originally, these were pillars to support the floor, and this would have been the place to heat the floor. Apparently, in some places in the bath house, the floor was so warm that one needed to wear sandals to avoid burning! 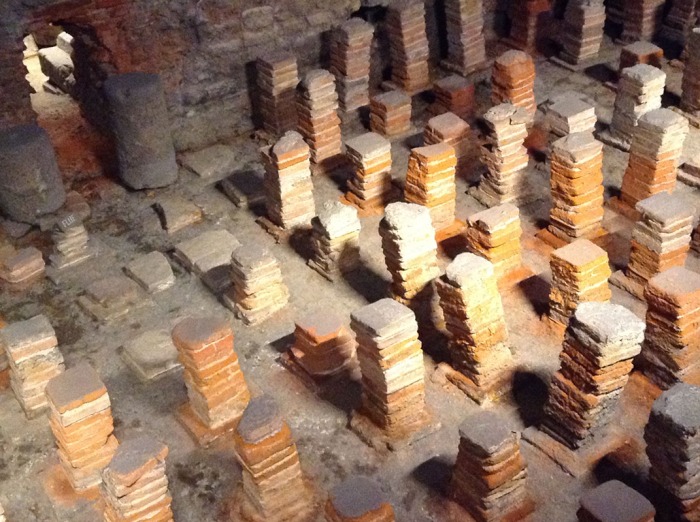 The photo below is of a mosaic tile floor. It caught my attention in particular because it shows a herd (school?) of hippocampi. I have dealt a lot with hippocampi recently, since I taught a workshop on mythical sea creatures when I was in Korea in July. 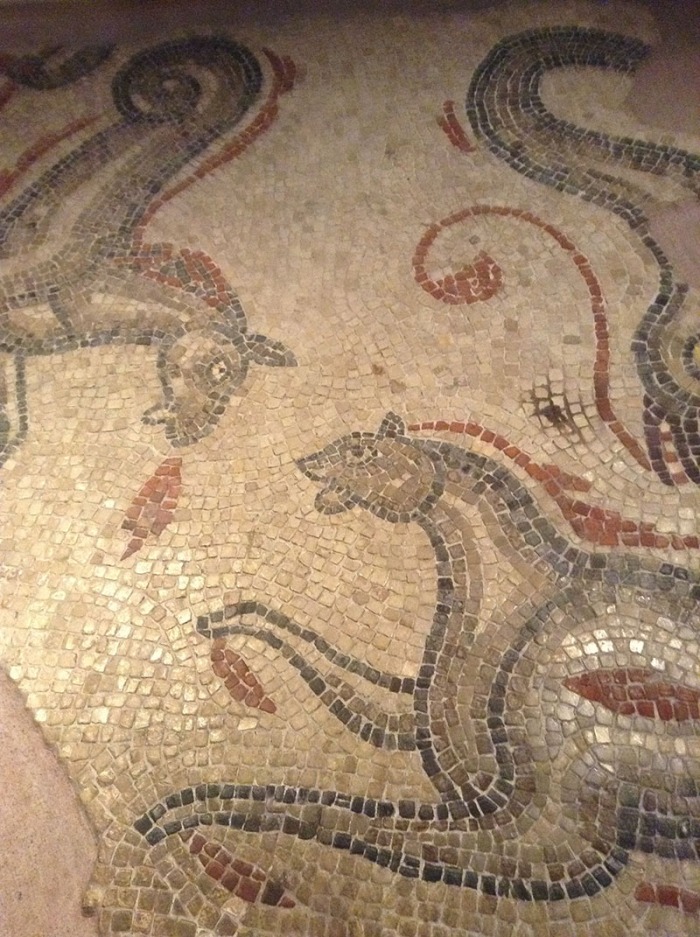 After the bath house, we ventured up to the fashion museum, which is situated in a Georgian style house. We took a quick spin in the ball room . . .

. . . and, afterwards, took a guided tour through the special exhibit of the Georgian clothes. As luck would have it, it was just the three of us on the tour, so we really were able to soak up a wealth of inspiration. The exhibit consists of original items (NOT reproductions) and gave me a lot of inspiration for character design.

My favourite piece was this embroidered coat from the 1720s. It has me thinking, in particular, of one specific character in a book I’m currently writing. (But more on that another time.) 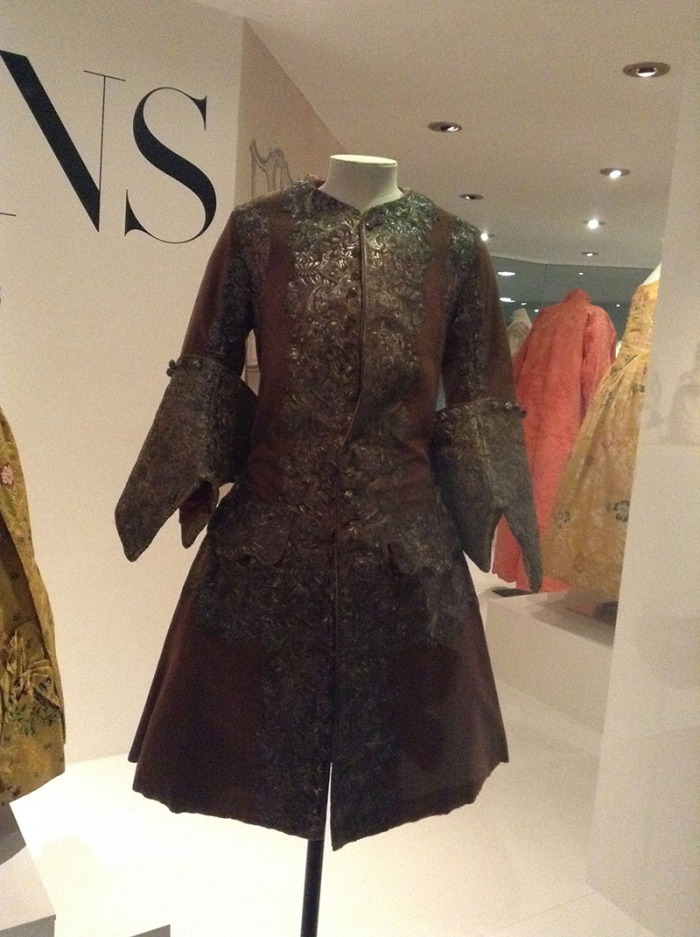 After the Georgian exhibit, we came across an area where we could dress in Victorian clothes and pose for photos. Marcie leapt at this opportunity. I was a little bit more reluctant at first (didn’t they have lice and all manner of vermin in the Dickens’ time?), but eventually my inner kid took over.

There was a group of older woman nearby, and they absolutely thrilled with how Marcie looked. “Oh, my, don’t you look lovely,” they kept saying.

For our evening entertainment, we went to the Theatre Royal to see Mrs. Henderson Presents. Before the show, we chose to eat in The Vaults. This is a restaurant located right beneath the theatre in . . . well, vaults. It’s a very cozy and intimate space and the food was delicious.

As for the play, it was a riot and it was good to hear my mom laughing out loud. (Really good, because the play was a bit racy and I wasn’t sure exactly what she would think of it first. But it wasn’t ME who booked the tickets; that was Marcie). Some might know Mrs. Henderson Presents from the film version; myself, I had never heard of it, but it was the perfect sort of play to see, as it is based on the real-life Windmill Theatre that was running in London during World War II. It was funny, dramatic, and poignant all at once.

Tomorrow is our last full day in Bath. Not sure what we’ll get up to. Perhaps it will be a day of taking it easy.

As usual, I leave off with some door photos. There’s a chapel we pass by on our walk into town from our B&B and it has some very interesting doors—I’d say rather steampunkish.