I found a happy package waiting for me on my doorstep last night: The new editions of Books 3 and 4 of my Kendra Kandlestar series.

I love the new colors: 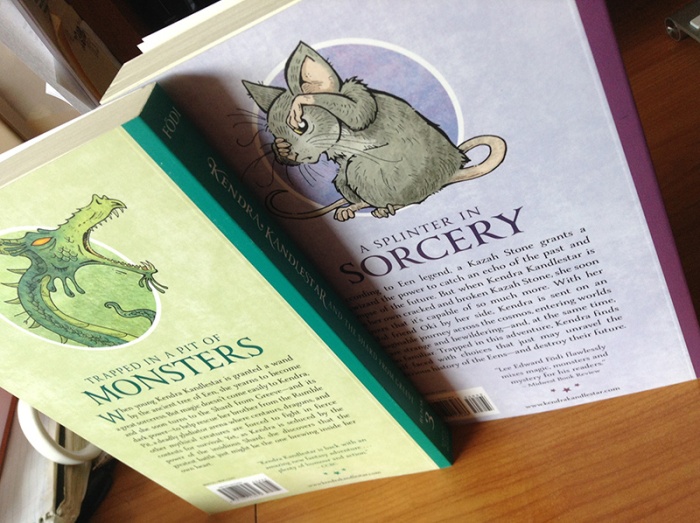 The four books in the series look great all lined up.

Here’s the official write ups for the two new editions:

Kendra Kandlestar and the Shard from Greeve (Book 3)

TRAPPED IN A PIT OF MONSTERS . . . when young Kendra Kandlestar is granted a wand by the ancient tree of Een, she yearns to become a great sorceress. But magic doesn’t come easily to Kendra, and she soon turns to the Shard from Greeve—and its dark power—to help rescue her brother from the Rumble Pit, a deadly gladiator arena where centaurs, dragons, and other mythical creatures are forced to fight in fierce contests for survival. Yet, as Kendra is seduced by the power of the insidious Shard, she discovers that the greatest battle just might be the one brewing inside her own heart.

Kendra Kandlestar and the Crack in Kazah (Book 4)

A SPLINTER IN SORCERY . . . according to Een legend, a Kazah stone grants a wizard the power to catch an echo of the past and a glimpse of the future. But when Kendra Kandlestar is given her own cracked and broken Kazah stone, she soon discovers that it’s capable of so much more. With her faithful friend Oki by her side, Kendra is sent on an unimaginable journey across the cosmos, entering worlds that are strange and bewildering—and, at the same time, all too familiar. Trapped in this adventure, Kendra finds herself faced with choices that just may unravel the mysterious history of the Eens—and destroy their future.

This is all leading up to the release of Book 5: Kendra Kandlestar and the Search for Arazeen, which is due out in the fall. Stay tuned for more sneak peeks!