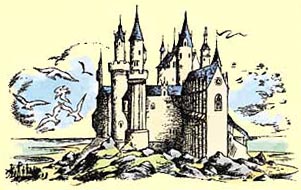 Cair Paravel wasn’t built in a day, so another week passes, and so here comes another entry in my continuing series on world building. This week, we’re discussing politics.

Sound dry? Fans of Game of Thrones will disagree! In that series, the whole plot revolves around who will rule the fictional dominion created by author George R.R. Martin.

However, even if your plot isn’t going to revolve around the political intrigue of your created world, it’s still important that you know how it operates, because, one way or the other, it will impact your characters. And if it doesn’t, you probably need to go back and do a little more building to make sure your world is more real and believable.

Some of the questions you want to ask about the political structure of your fictional world:

How is the land ruled? A singular person (king, queen, president)? Or is it by a council?

How are rulers selected? Are they born into power, or are they appointed or elected?

What are the important laws?

Are there punishments for breaking the law? If so, what?

What are the laws based on? Keeping peace? Are they meant to keep people safe (like in the Land of Oz), or to keep them in line (like in Lois Lowry’s The Giver)?

Councils or multiple rulers seem popular in fictional worlds. Narnia famously had two kings and two queens (well, after Jadis the white witch was ousted). Harry Potter’s world is run by a ministry of magic, while Hogwarts is run by a single headmaster (Dumbledore), with the students organized into four competing houses. In Kate DiCamillo’s Tale of Despereaux, there is a council of thirteen mice while in Richard Adams’s Watership Down there is a Chief Rabbit that is protected by the Owsla, traditionally a group of the physically strongest rabbits. The Star Wars universe has a council of twelve Jedi, harkening back to the tradition of King Arthur and the knights of the round table. In my Kendra Kandlestar books, there is a council of seven elders with the Eldest of the Elders holding the most prominent position. The council isn’t elected, but rather nominated, which does end up causing some problems for them (a bit more about that below).

This leads us to the important question of how people are picked or “assigned” in a fictional world. J.K. Rowling had great fun with this when it came to how students are sorted into their houses at Hogwarts. I love this doodle of Rowling’s brainstorming: 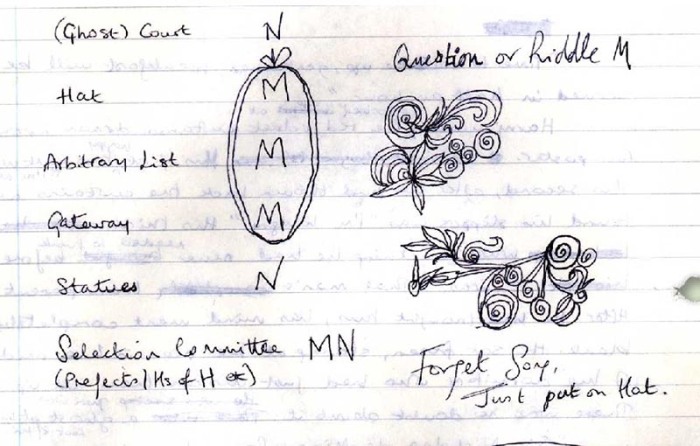 It shows she considered a variety of options. Eventually, of course, she went with the sorting hat singing a song. (You’ve got to love her doodle of the sorting hat! One thing that I’ve noticed about so many fantasy writers is that they are quite artistic, even if they aren’t illustrators. They seem to sketch and doodle their way to success.)

When it comes to creating rules for a kingdom, I always like to guide my students with the following principle: Create a set of rules that will cause your protagonist problems. If you do a good job of this, then your character will be forced to break the rules and, Voilà! Instant problem, instant plot generation.

In Tale of Despereaux, for example, there is a whole series of rules that the mice should live by, such as mice shall nibble paper, mice shall be afraid of humans, and so forth. Little Despereaux, of course, breaks them all. These rules are paralleled in the upper, human world, where the king has decreed that all rats are outlawed and soup (or anything to do with the making or eating of soup—even spoons) are banished. Because characters break the rules, they are forced to deal with consequences and repercussions that propel the plot forward.

Of course, rules can change as the plot progress. In Kendra Kandlestar, the malevolent wizard, Burdock Brown, wheedles his way onto the Council of Elders and pushes everyone else of merit out so that, soon, he’s the one in power. He ends up creating all sorts of laws that directly impact Kendra, not the least of which is sealing the magic curtain of Een (at exactly the time she needs to leave) and confiscating all wands. Eventually, Kendra’s Uncle Griffinskitch is imprisoned and Kendra and her two companions become fugitives:

(If you ask me, Honest Oki is still cute, even when drawn to look like a villain.)

I’ve actually used this activity with many of my writing students to help them create conflict in their stories. Nothing gets a plot going like a good old act of injustice! 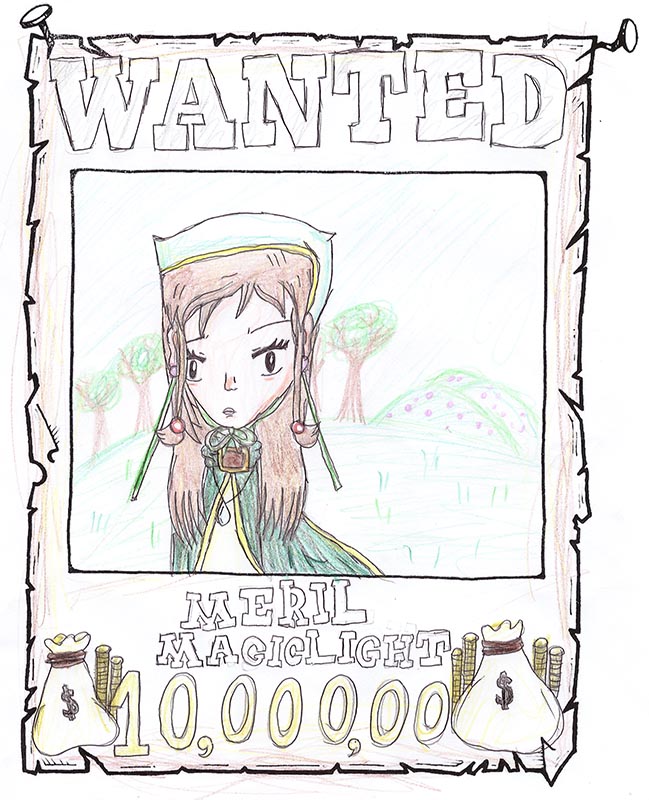 Here’s one more that I just have to show because it vilifies ME. (Yes, I’m often the villain in my students’ stories!)

I’ve been focusing this post on political rules, but it’s worth mentioning that this topic also implies to rules of magic. The most difficult part of writing high fantasy, in my opinion, is making sure your rules of magic make sense. Otherwise, just anything can happen at any time, and you end up with an instant remedy to any plot problem. It’s important to know the rules (and costs, if you like) for how characters can use magic.

In my Kendra Kandlestar series, only some of the Een people can use magic, and these are the ones who are trained as wizards or sorceresses. The magic is within them, but it is channeled and amplified by their wands or staffs of Eenwood. The Eenwood is a magical wood, still alive, and it grows with the user as he or she grows in magical wisdom. The Eens also have Kazah stones, which help them catch glimpses of the past (or a glimmer of the future).